You are at:Home»Research»Clergy Age Trends in the United Methodist Church: 1985-2021

Highlights of the 2021 Report 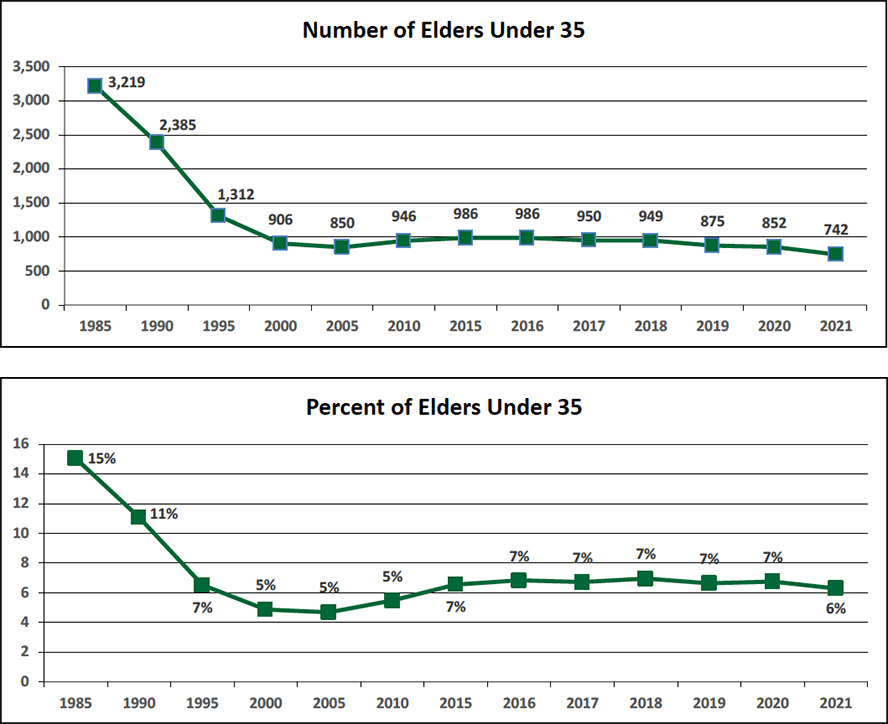 Some Shifting from Older to Middle Age Elders

Since 2000, we have been watching a trend of having fewer elders in the middle age (35-54) group and more elders in the older (55-72) group. Since those in the older group face a mandatory retirement age of 72, with most retiring before that age, it seemed that this expanding pool of older elders could not continue to grow indefinitely. After 20 years of growth, one began to wonder whether such a decline might ever happen. Last year there was a modest turn in this trend, with a 1% shift from the older group to the middle age group.

In 2021, there is another 1% decline in older elders as a percentage of the whole. Older elders now comprise 54% of all elders. (They comprised 30% as recently as 2000.) Middle age elders went from 38% of all elders to 40%. (They comprised 65% in 2000.) The proportional gain for the middle age group came from the 1% decline in older elders and 1% from the young elders’ decline. Keep in mind that all age groups of elders declined in raw numbers, but some declined more than others, thus the change in proportional representation.

The numbers and ages of deacons follow similar directions as elders. There is a decline in the number of young deacons since 2019 of 23%. Young deacons comprise 10% of all active deacons in 2021, higher than the percentage for young elders, though this percentage has declined from 12% in 2019. One caution in the deacon statistics to remember is that the total number of deacons is lower in this report than their presence in the denomination. This difference is because a number of deacons serve in work settings other than congregations and have pension plans through those agencies rather than Wespath Benefits, from which our numbers come.