You are at:Home»Research»Clergy Age Trends In The United Methodist Church: 1985-2020

Highlights of the 2020 Report

Decline in the Number of Young Elders Continues

Since reaching the record low point for under 35 elders in 2005, there have been these phases: 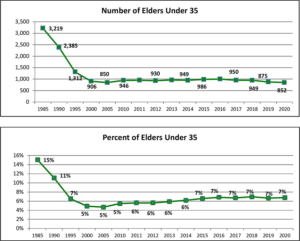 2016–2018 (Modest Decline)
The number of young elders declined modestly. There actually was a net gain of men by 3 with dramatic declines in women (-51).

Since 2000 we have been watching a trend of having fewer elders in the middle age (35-54) group and more elders in the older (55-72) group. Since those in the older group face a mandatory retirement age of 72 with most elders retiring well before that age, it seemed that this expanding pool of older elders could not continue to grow indefinitely. After twenty years of growth, one began to wonder that such a decline might never happen. This year we see a modest turn in this trend with a one percent shift from the older group to the middle age group. It will be interesting to see if the trend continues. Though the change is small, it could mark a shift we have not seen in twenty years in the age makeup trend of United Methodist elders.