The Lewis Center for Church Leadership has released its annual report on clergy age trends in the United Methodist Church. This year’s statistics show that the number of ordained elders under 35 has reached an all-time low. Lovett H. Weems Jr. recounts the trendline for young elders in recent decades noting significant downturns since 2016 erasing several years of progress.

Sixteen years ago, the newly established Lewis Center for Church Leadership issued its first report on clergy age trends among United Methodist clergy. The research emerged from an uneasiness about a perceived absence of young clergy compared to previous eras. Working in partnership with the General Board of Pension and Health Benefits (now Wespath Benefits), the Center opened a window on an alarming trend that illustrated the very low percentage of young clergy.

In 1978, 10 years after the formation of the United Methodist Church, 23% of active elders were younger than 35. By 1985, the proportion of young elders was still more than 15%. The first clergy age report issued by the Lewis Center showed that by 2005, elders under 35 years old had reached a low point of 850 or less than 5% of elders.

There followed a range of local initiatives from bishops, conferences, and boards of ordained ministry. The Division of Ordained Ministry brought together those from across the denomination, wanting to make a difference, to share ideas as well as hosting events. Legislative changes were also made to help both with the framing and the process of entry into ordained ministry. In 2012, the General Conference approved the Young Clergy Initiative and budgeted $7 million for the quadrennium. It was reapproved for approximately the same amount in 2016.

Due to the overall decline in the total number of active elders in the United Methodist Church, the percentage of young elders in the pool of all active elders only declined 1% to 6%, still somewhat higher than in 2005. While many are understandably discouraged about the overall decline in elders, younger elders continue to be a significant though small cohort that need encouragement and support. The percentage of young elders is lower than that of both young deacons and young local pastors.

Last year’s report detailing the decline of young elders to a near historic low led to a significant response from readers. As a result, Dr. Ann A. Michel of the Lewis Center staff used several survey questions to ask those who have reservations about pursuing ordination more about the nature of their concerns. Her subsequent article, What’s Keeping Younger People from Ordained Ministry in the United Methodist Church, has been read and shared widely.

The full report, Clergy Age Trends in the United Methodist Church, 1985-2021, covers age trends for all elders, including the identifying of conferences that have larger numbers of young elders and the latest figures and trends for elders, deacons, and local pastors by annual conference. Download the full report. 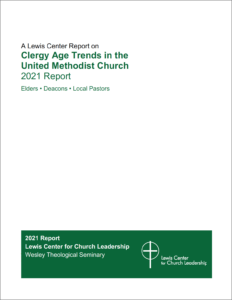