You are at:Home»Leading Ideas»Addressing the Root Causes of the Crisis of Younger Clergy

Few doubt that struggles over the United Methodist Church’s stance on homosexuality and uncertainty about the future of the denomination are factors in the recent, precipitous decline in the number of young elders. But Ann Michel of the Lewis Center staff says the church can’t ignore the myriad other systemic problems causing fewer younger people to enter ministry.

The Lewis Center’s 2020 Clergy Age Trends Report revealed that the number of young elders (under 35) in the United Methodist Church has declined precipitously since 2016 to a near record low of 852. Few doubt that major factors in this recent slide are uncertainty about the future of the denomination and the church’s stance on homosexuality. But it is also important to acknowledge that the decades long decline in young clergy stems from myriad systemic factors.

In 2007 the Lewis Center explored the young clergy issue using a variety of information gathering methods including a major survey of United Methodist clergy under 35. What emerged from this study was an understanding that the young clergy crisis is a complex, multi-dimensional phenomenon with no single cause and no single solution.

The young clergy crisis is a complex, multi-dimensional phenomenon with no single cause and no single solution.

Among the many factors involved are enlistment efforts, seminary culture, the candidacy and ordination processes, seminary tuition and debt, the adequacy of clergy compensation, appointment practices, support structures for young clergy, and generational differences between younger clergy and older congregants.

But these specific issues are secondary to others that are less tangible and less amenable to change. In The Crisis of Younger Clergy (Abingdon Press, 2008), Lovett H. Weems Jr. and I concluded “the presence of young clergy is ultimately connected to the overall health of the church and its attractiveness to younger leaders; the vitality of youth ministry and its effectiveness in cultivating call among young persons; and the receptivity of church culture to young leaders and new ideas.” We discovered in our survey that the most common characteristics of under-35 clergy were 1) they were active in church as children, and 2) they were active in church as youth. We cannot simply hope for more young clergy without reimagining our ministry with children and youth — a strategy Bishop Janice Huie describes as “overinvesting in the young.”

It’s bigger than the elephant in the room

It’s tempting to imagine that young clergy numbers will rebound when the denomination gets beyond its current struggles, but this is unlikely unless we redirect our attention to the larger systemic issues. The Crisis of Younger Clergy outlined some key strategies that are even more critical today than they were when we wrote the book, including:

The setbacks in the last four years are discouraging. But we should not lose sight of the fact that the ten-year period between 2006‒2016 was marked by a gradual but steady increase in the number of young elders, due in no small part to the deliberate efforts of conferences, denominational agencies, seminaries, and local churches across the denomination. Funds are necessary, but so too are targeted, meaningful strategies to assure that available resources are deployed in effective ways. The good news is that recent history suggests progress is possible when we maintain our focus and resolve. 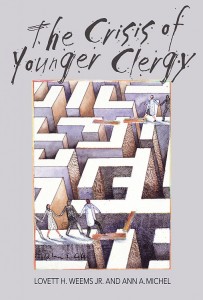