You are at:Home»Leading Ideas»Lessons for Clergy Preparing to Leave a Congregation

Lawrence W. Farris writes that how a pastor leaves a congregation is crucial for the pastor’s future work and well-being as well as for the congregations.

Good endings to pastorates open the door, for both pastor and congregation, to promising futures of new faithfulness to God’s work in the world. Abbreviated, curt, lack-of-closure endings, on the other hand, encumber both pastor and congregation with unnecessary burdens that will impair new beginnings. In the best of circumstances, leaving a pastorate can be an occasion for celebration and gratitude. The ministry created and brought to fruition through the pastor’s relationship with a congregation can be celebrated as God is praised for what has been accomplished during the pastor’s tenure. The pastor can be thanked for the leadership offered; the congregation can be thanked for the responsiveness they have shown. Both pastor and people can rejoice in growth in faith; both can laugh at lessons learned through folly; both can weep for sorrows shared. Even at the close of a good pastorate, however, there are other feelings to be acknowledged. And there is work to be done in order for both pastor and congregation to be free to embrace the future gladly and expectantly.

How a pastor leaves a congregation is crucial for the pastor’s future work and well-being as well as for the congregation’s.

Sometimes leaving a pastorate, especially a good and faithful one, can feel like nothing so much as a death. A pastor has for some number of years been pouring energy into a relationship with a congregation, and now that relationship is ending. The relationship has been rich and complex, marked as any relationship will be by strengths and weaknesses, to be sure, with the balance hopefully towards the former. Now in the congregation there is sadness, perhaps anger, maybe a sense of rejection, certainly a measure of grief. The departing pastor often shares some of the sadness and sense of loss even as these feelings are mingled with expectation of what lies ahead. One temptation on the pastor’s part is to mask the pain of this loss with excitement about a new position and its possibilities, or the anticipated pleasures of retirement; another is to flee as quickly as possible and to let others clean up whatever mess or hurt is left behind. But pastors who have sat with the dying and their families know that such illusory denials do not work. And they are not what God intends when partings come.

In other situations, when the pastor-congregation relationship has been painful and strife-ridden, leaving can feel like a divorce. There can be anger, blame, and mutual recrimination for a history of hurts inflicted by both parties. There can be feelings of relief now that the party deemed responsible for the pain will no longer be present. But there is also the possibility for forgiveness and learning as the relationship ends. Again, the pastor’s temptation to flee to a situation which is assumed to be better merely for being different is fraught with danger, as is the congregation’s certainty that all will be well once the so-­and-so is off the premises. Both need to remember that we are called in our faith to work toward reconciliation.

It is not as rare as one might think, or hope, that congregations sometimes call similar pastors (sometimes even in physical appearance!) time after time. And no one should be surprised that the same congregational problems keep arising pastor after pastor in such circumstances. Likewise, some pastors keep finding themselves in congregations with similar types of problems. And they should not be surprised at the
commonality they keep seeking out at some preconscious level. When scripture says that the sins of the fathers and mothers are visited upon successive generations (Exodus 20:5), it’s not just because God is jealous. It’s because people often choose not to learn from their mistakes and thereby keep repeating the same patterns of brokenness. What’s the popular definition of insanity? Doing the same thing over and over again and expecting different results. Without seeking good partings, both pastors and congregations can be prone to repeating previous mistakes.

How a pastor leaves a congregation is crucial for the pastor’s future work and well-being as well as for the congregation’s. The time of parting affords an often-missed opportunity for learning and clarification, for healing and forgiveness. It is a time when persistent negative patterns can be identified and altered; it is a time when cherished traditions can be honored and sustained. If the leave-taking is done with honesty and intentionality and as much compassion as possible, the aforementioned gifts can bring new life to both parties. 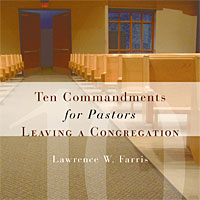