You are at:Home»Leading Ideas»Faith Leaders Are First Responders in Preventing Suicide

Anne Mathews-Younes writes that faith leaders and faith communities are in a unique position to prevent suicide. She shares information about how to recognize the warning signs for suicide, ask the suicide question, and get help for those who are at risk.

More than 46,000 people died by suicide in 2020. It is the ninth most frequent cause of death in the U.S. and the second most common cause of death among teens and young adults. Moreover, it is a public health menace that spans the entire human lifespan, with men aged 75 or older having the highest rate of completed suicide. Statistically, of the 12.2 million people who seriously consider suicide, 10% act on these intentions in a way that could result in their deaths. (American Foundation for Suicide Prevention)

Sharing the Good News of Jesus Christ is suicide care.

Given that these are staggering numbers, it is statistically inevitable that some of these people attend your church, live in your community, or are among your family and friends. For example, in a congregation of 200 people, eight members have had thoughts of suicide within the last year.

But there is hope. Because of strong social support, life-affirming values, and love, faith leaders and faith communities are in a unique position to prevent suicide. Faith communities are cultures of hope, bastions of faith, settings of hospitality, and places for life-engaging connection. Saving lives from suicide depends significantly on communicating hope and engaging people in meaningful connections. The Gospel of Jesus Christ is the Good News that brings much needed hope to those who are struggling with doubts, fears, or despair. Sharing the Good News of Jesus Christ is suicide care.

A Christian perspective on suicide prevention

A Christian perspective on suicide prevention begins with an affirmation of faith that nothing, including suicide, separates us from the love of God (Romans 8:38-39). Suicide is explicitly mentioned only six times in the Bible, and each biblical suicide has a context. Biblical accounts of suicide describe the inner struggles and emotional distress experienced by people who ended their lives — struggles of humiliation, pain, shame, and remorse, such as the suicide death of Judas Iscariot. The context of a suicide we see today may be different — emotional distress, relationship breakups, socioeconomic stressors, and more.

More than half of persons who seek outside help when in crisis turn first to their clergy. However, most clergy have not received specific training in suicide prevention, and 49% of pastors say they rarely or never speak to their congregation about suicide, although 76% of churchgoers say suicide is a problem that must be addressed. When clergy respond to a suicide event in an unhelpful manner, it has been reported that up to 60% of previously engaged families leave the church in the aftermath of a suicide loss.

Is there more that you can do right now? Yes. One of the most helpful things church leaders can do is to educate their congregations about suicide and its prevention. It is also important to recognize the warning signs for suicide and know how to ask the suicide question and get persons help.

The National Institute of Mental Health (See Warning Signs of Suicide) outlines these nine warning signs in a person at risk of suicide:

How to ask the suicide question and find help 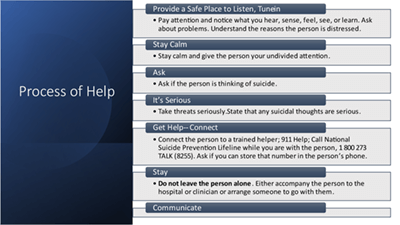 It is fine to ask specific questions about how a person might be feeling and what they’re thinking. It could be something as simple as “It seems you have been struggling/worrying for a while now. Tell me. Are you thinking about killing yourself?”

Don’t worry. You will not plant the idea of suicide. If it’s there, it’s there. In fact, asking about suicide can make things better because you will convey that you can handle talking about it, so the person may feel less alone. The simple act of authentically listening and talking to someone during that vulnerable window of time between the thought of suicide and action can make an enormous difference.

Suicide is never inevitable. Helping someone find a safe environment that is full of the support, care, and treatment they need can and does save lives.

For more information about suicide prevention in faith communities, please contact The Way Consulting Int’l, a Division of the E. Stanley Jones Foundation.

Anne Mathews-Younes, EdD, D.Min., is the granddaughter of Dr. E. Stanley Jones, one of the great missionary evangelists of the 20th century. Mathews-Younes is President of The Way Consulting Int’l and President of the E. Stanley Jones Foundation. She is also a psychologist who worked for 28 years with the Federal Substance Abuse and Mental Health Services Administration.