A few years ago, I was speaking at a large youth ministry conference in England, talking about youth in churches, when a young woman cornered me on a break. “Why are you always talking about ‘the church?’” she asked. “Youth aren’t in the church.” Suddenly I remembered where I was. As much as Americans gripe about our dwindling church attendance, our membership statistics would make European Christians weep for joy. The young woman was right, at least about England: only 1% of British young adults attend the Church of England, and 70% of British young people say they have no religion at all.

Being a youth minister does not depend on who employs us. It depends on who we love.

It suddenly dawned on me that the youth in the United States were headed in a similar direction. The statistics are not parallel, but in the United States 63% of teenagers say they are Christian and 36% of millennials say they belong to a church, mosque, or synagogue. One in three say they have no religion in particular.

Youth ministry turned inside out

Nonetheless, I was speaking at a youth ministry conference with more than 1,000 youth workers. Who were all these people, if they weren’t working in churches? I began to pay attention to people’s name tags. I met pastors, of course, but also teachers, a wrestling coach, YMCA staff, community youth workers, parachurch youth leaders, university students, social workers, denominational staff, volunteers with sports leagues and hunger programs and theatre troupes. All these people saw themselves as youth ministers, yet “youth ministry” was not in their job description.

Youth ministry in the United Kingdom seemed to have turned “inside out.” These youth ministers were not focused primarily on churchgoers or people “attracted” to congregations; their ministries were focused on the lives of young people in neighborhoods, schools, health clinics, community organizations.

The number of young people who need Christ in the U.K. hadn’t changed; the need for youth ministers was as high as ever. What changed was where those young people were found. Youth ministers seemed to be deployed by the church more than employed by the church. Someone in England had had the presence of mind — even as churches closed their doors — to acknowledge that being a youth minister does not depend on who employs us. It depends on who we love.

Christian social innovation as a context for ministry with young people

Now that entertainment models of youth ministry in church basements have largely run their course, Christian social innovation has become a common alternative context for ministry with young people. That is noteworthy, since from its inception youth ministry has reliably served as the church’s research and development department and tends to foreshadow trends to come. I still get quizzical looks when people learn that I have spent the last decade teaching spiritual entrepreneurship and social innovation. I am a little shocked to find myself here as well; my primary work is still with adolescents and young adults in churches — except that, increasingly, these young people are not in churches. I wound up in social innovation because I chased young people here.

Seven in 10 young adults work to create positive social change on a daily basis, according to a 2020 YMCA/OnePoll survey. Significantly, they are not merely looking for productive forms of service. For young adults, especially, creating change is a meaning-making activity, a creative outlet, that often offers purposeful community and something akin to mystical or sacred alignment. In short, social innovation very often has spiritual significance for young people with or without an accompanying religious story.

Meanwhile, studies consistently show that young Americans trust small business to improve society more than they trust NGOs, religion, government, or social media. In short, young adults hoping to “make a difference” in the world are much more likely to become entrepreneurs than public servants or church workers. I decided that if youth thought social innovation was a more trustworthy route to an alternative vision for humanity than the church, I needed to understand why.

Embedding the church alongside young people where they live and work

Beyond the church walls, there are spaces where young people find meaning, community, and purpose — arenas of activity like redemptive agriculture, the arts, activism, and placemaking, to name a few. These domains lack a common identity-shaping narrative, but they tend to welcome experimentation, and most have cobbled together traditions, patron saints, and special stories of their own. They incubate their own forms of social innovation that, interestingly, quite often have spiritual dimensions, in practice if not in name. Young people often say these domains give them identity and purpose that feel vaguely sacred, if not Christian.

To a catechized imagination, it is easy to see Christ is at work in these spaces, though Christ often goes unnamed and unnoticed. But because the church is overwhelmingly absent from these domains beyond congregations, faith is mostly on mute. There are notable exceptions, but for the most part no one is building bridges that connect these innovators’ stories with the church’s Story. That means there is no way of letting innovators know that the church, the people who participate in God’s innovation, experience young people’s work in these domains almost sacramentally, as material expressions of God’s grace.

More and more, ministry with young people means finding young people where they live and work, embedding the church beside them as they seek meaning, purpose, and belonging (which churches promise, but often fail to deliver) in other domains like sustainable agriculture, health and wellness, placemaking and community development, and creative arts, to name a few. 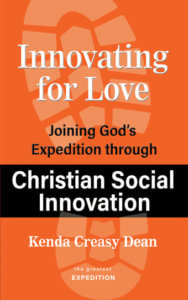 This article is adapted from Innovating for Love: Christian Social Innovation (Market Square Books, 2022) by Kenda Creasy Dean. Used by permission. The book is available through the publisher and Amazon.

Kenda Creasy Dean is the Mary D. Synnott Professor of Youth, Church, and Culture at Princeton Theological Seminary, working closely with Princeton’s Institute for Youth Ministry and the Farminary. She is an ordained United Methodist pastor in the Greater New Jersey Annual Conferences and the author of numerous books on youth, church and culture.