What accounts for the rapid increase in the percentage of Americans who claim no religious preference? Ann Michel of the Lewis Center staff shares key findings from Ryan P. Burge’s recent book The Nones.

A notable shift in the religious landscape over the past 40 years has been the rise of the “Nones.” This informal term denotes those who check “none of the above” when asked about their religious affiliation. Since the 1990s, the percentage of Nones has risen from single digits to roughly a quarter of the U.S. population. They now constitute as large of a percentage of the population as the country’s two largest religious groups, Catholics and evangelical Protestants. And they will likely become the largest segment of the population within a decade.

No segment of American society is immune to the rise of religious disaffiliation.

What accounts for this seismic shift? Ryan P. Burge, a political science professor and an American Baptist pastor, analyzes the trend in a new book The Nones: Where They Came From, Who They Are, and Where are They Going (Fortress Press, 2021.) Dr. Burge’s systematic analysis of key data and trends dispels some common myths, provides some surprising new insights, answers some questions, and gives rise to others.

Not the usual suspects

Burge carefully examines the available data to determine what might be fueling this sea change in the religious landscape. According to his analysis, some of our common explanations aren’t the major factors we imagine them to be. Yes, Americans are more socially isolated than we once were (Robert Putnam’s bowling alone theory). But the data do not support this as a significant reason why people leave religion. Lack of trust in institutions may be a piece of the puzzle, but it is not the main culprit. And changing family structures, particularly the increase in unmarried adults, explains the religious disaffiliation of only about 3% of the American population according to his calculations.

An exodus of liberals

As a political scientist, Burge is particularly interested in the impact of politics on religious affiliation. He sees increasing political polarization as the best and clearest explanation for increasing religious disaffiliation over the past four decades. His argument goes like this. Since the rise of evangelicalism and the religious right in the late 1970s and ’80s, more and more religious Americans are found on the right side of the political spectrum — not just in evangelical churches but in many mainline denominations, as well. Burge reports that in 1978, half of all white weekly churchgoers identified as Democrats. Today just one quarter do. He posits that the rise of the Nones, which accelerated dramatically in the mid-1990s, represents an exodus from the church of political liberals and moderates who have come to see religion and political conservativism as essentially one. He points to a “clear and unmistakable” relationship between disaffiliation and political ideology. In 2018, almost 46.6% of liberals and 30.5% of those who lean liberal were disaffiliated compared to only 9.8% of conservatives and 13% of those who lean conservative. Burge says that “liberals have always been more likely to be unaffiliated, but the disparity has never been so large.”

Diversification of the Nones

Ryan Burge’s work also illustrates that as the number of Nones has grown, the cohort has become more diverse, dispelling some common assumptions around who’s religious and who’s not. Today, those with higher levels of education are only slightly more likely to eschew religious affiliation than less-educated Americans. Men continue to leave religion at a higher rate than women, but the gender gap is narrowing. In 2018, a woman without children was just as likely to be a None as a childless man. In 1980, just 5% of Black people said they were unaffiliated with a religious group. By 2018, the percentage was 20.8%. Burge’s chilling conclusion is that no segment of American society is immune to the rise of religious disaffiliation.

Sociologists of religion have long studied the theory that, as a society advances in terms of educational achievement and prosperity, there is a corresponding move away from religion. The trajectory in many developed nations, particularly in Europe since World War II, seems to confirm this theory. Yet, the United States remains a stubborn outlier. Some attribute this to unique aspects of the American political and religious experience. Others believe America is headed in the same direction, even though it is several decades behind the curve.

At the end of the day, it may be that people’s religious beliefs and behaviors haven’t really changed that much. The rise of the Nones may indicate that the irreligious and those only marginally attached to a religious group feel more comfortable indicating that they are “nothing in particular” than did survey respondents in previous eras. The rise of the Nones may reflect an erosion of the “social desirability bias” that led some survey takers to misstate or exaggerate their religious participation. Burge concludes “it is possible, and probably even likely, that many millions of people were just not being honest with survey administrators decades ago and now we are seeing a more accurate picture of American religion.”

Are there glimmers of hope for congregations and their leaders in any of this? One helpful aspect of Burge’s analysis is his mantra that “not all Nones are created equal.” He examines differences between those who are atheist or agnostic and those who describe their religious affiliation as “nothing in particular.” It is the “nothing in particulars” who are the fastest growing religious group in the United States. While atheists and agnostics have well-thought-out objections to religion, the “nothing in particular” group is more malleable and potentially receptive to faith. And even at a time when nearly a quarter of Americans do not associate with a particular religion, almost all still profess some type of belief in God.

All of this makes the Nones our most significant mission field, but churches are unlikely to connect with them by doing what we’ve always done. Every None has a story to tell about their life and why the church no longer connects with it. And we must learn how to listen and respond. 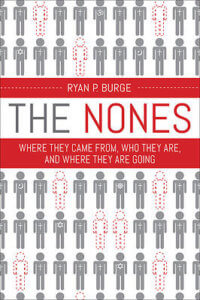 The Nones: Where They Came From, Who They Are, and Where They are Going (Fortress Press, 2021) by Ryan P. Burge is available at Cokesbury and Amazon.