The local church is often the first place people go for help in addressing mental health challenges. Matthew Stanford sees this as a divine opportunity and suggests ways churches can address the subject of mental illness more openly and honestly.

Only 12 percent  of church leaders feel that mental illness is openly discussed in a healthy way within their congregation.

Simple ways to start the conversation

These suggestions for simple changes will help start a conversation about mental health within your faith community.

One way to eliminate the stigma related to mental illness is to carefully choose your words when describing mental health conditions and the people who live with them. We can choose to speak words that give life or words that shame.

Stigmatizing language bring shame. Its purpose is to minimize, disgrace, or dehumanize someone in order to justify inaction and lack of compassion. Derogatory terms such as “crazy,” “nuts,” “psycho,” and “loony” constitute stigmatizing language and have unfortunately become part of everyday lingo. These terms express contempt and disrespect toward individuals living with mental illness, even if the words are not being spoken directly to them; they simply should not be used.

Using mental health terms to explain everyday individual quirks or behaviors that are common to many — for example, using “OCD” to describe someone who is organized or “anorexic” to depict a woman who is thin — is also stigmatizing. Such mental health cliches minimize the severity of mental disorders and further confuse people’s limited understanding of these complex conditions.

Put the person before the illness.

When speaking of those who have been legitimately diagnosed with mental health conditions, always put the person first, not the illness. For instance, do not use language that defines people according to the diagnosis, such as, “He’s schizophrenic” or “She is a bipolar.” The person is far more than the diagnosis. Instead say, “He has been diagnosed with schizophrenia” or “She is living with bipolar disorder.”

Likewise, when talking about a suicide, do not say that a person “committed suicide.” The word “committed” suggest that the individual performed a reasoned and rational act, much like if someone has “committed a crime” or “committed a sin.” Rather, say that the individual “died by suicide.” In situations in which it was commonly known that the person was struggling with a diagnosed mental disorder it may also be appropriate to say that the death resulted from the disorder. For example, “he died as a result of depression” or “her death was the result of bipolar disorder.”

Research indicates that the local church is the first place people go for help in addressing mental health challenges. Churches can embrace this as a divine opportunity by addressing the subject of mental illness more openly and honestly. 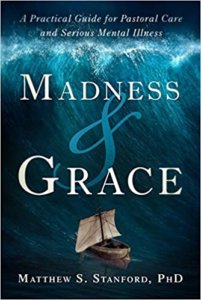 This article is excerpted from Madness and Grace: A Practical Guide for Pastoral Care and Serious Mental Illness (Templeton Press, 2021) by Matthew S. Stanford, PhD. Used by permission. The book is available through Cokesbury and Amazon.

Matthew S. Stanford, Ph.D., is CEO of the Hope and Healing Center & Institute in Houston, Texas. He is also adjunct professor of psychiatry at Baylor College of Medicine and the Houston Methodist Hospital Institute for Academic Medicine. He is the author of Madness and Grace: A Practical Guide for Pastoral Care and Serious Mental Illness (Templeton Press, 2021), available at Templeton Press and Amazon.