What kind of vision helps a church finds its way forward? Lovett H. Weems, Jr., says a vision needn’t be grandiose, nor is the process necessarily linear. Drawing on Margaret Wheatley’s “circular” understanding of vision, he explains that visioning can involve a series of small, next-step visions that become a field of energy from which a larger vision emerges.

Margaret Wheatley distinguishes between a traditional “linear” view of vision and a “circular” view, which she sees as more compatible with today’s world. The linear view points to a future destination and the vision serves as a magnet pulling everything toward the dream.

The circular or spiral view of visioning sees the process beginning with small next-step visions that become “fields of energy” out of which larger visions emerge.

The classic illustration of linear vision is President John F. Kennedy’s announcement in the early 1960s that the United States would send a man to the moon and bring him back safely before the end of the decade. The things needed to achieve this great feat were not in place when he made that declaration. In a speech at Rice University on September 12, 1962, Kennedy said that the astronauts will travel in space ships “made of new metal alloys, some of which have not yet been invented.” But as the dream caught on, it brought with it the necessary money, innovation, and technology. That is the character of such a vision.

The circular or spiral view of visioning sees the process beginning with small next-step visions that become “fields of energy” out of which larger visions emerge. The final destination may not be known. If the mission stays clear as the guide point, then instead of the energy spiraling into unrelated activity, the energy builds from one vision to another. Destinations are reached but in a much greater self-organizing pattern. There are times when both approaches are fitting for churches, but my experience is that this second view is more often the one that suits congregations. It is true that if we are faithful in the smaller visions God gives us, we are given greater visions.

Wheatley’s view of visioning comes from her study of “new science” and gives attention to how nature innovates. Peter Senge says it this way: “The underlying shift that I believe is needed is to think of our organizations as living organisms rather than machines.” Senge, Wheatley, and others remind us that the Machine Age was built on the ability to control; whereas, no one controls living systems. They suggest that leadership would do well to allow for surprise and for the power of the impact of small changes. Just as chaos theory teaches that small changes can have big effects in physical systems, the same concept can be seen in human systems.

The historical worldview shaped by a Newtonian paradigm assumes that the world is like a machine. The parts of the whole are finite in number, and they are related in simple and repetitive ways; one cause has a direct effect. The new science paradigm assumes that the parts are interdependent and whatever affects one can change all others. This approach can help shape how we understand vision and other elements of leadership as well. 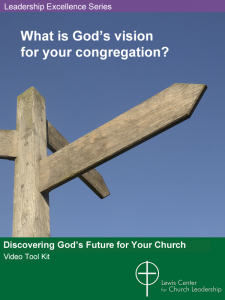 If you would like to share this article in your newsletter or other publication, please review our reprint guidelines.