You are at:Home»Leading Ideas»Divided by Faith and United by Faith

Divided by Faith: Evangelical Religion and the Problem of Race in America by Michael O. Emerson and Christian Smith (Oxford University Press, 2000) documents the pervasiveness of the racial divide in post-Civil Rights America, despite a decrease in overt prejudice. Unfortunately, the authors conclude that American religion is ineffective in reducing the current racial divisions; indeed, religion generally reinforces divisions.

This conclusion is admittedly paradoxical, given the positive role organized religion played in the Abolition and Civil Rights movements, and continuing, sincere efforts at racial reconciliation across the religious spectrum. Drawing on historical and sociological data, Emerson and Smith maintain the “individualism” characteristic of Protestant Evangelicals blinds some Christians to the institutional and structural aspects of racism. Noting that in more than ninety percent of American congregations ninety percent of members are of a single race, Emerson and Smith maintain the very structure of American religion reinforces “internal similarity” where like seek like. This, in turn, perpetuates the division of our society at large.

In United by Faith: The Multiracial Congregation As an Answer to the Problem of Race by Michael O. Emerson, Curtiss Paul DeYoung, George Yancy, Karen Chai Kim (Oxford University Press, 2003), Emerson and a group of collaborating authors make a case for multiracial congregations as an antidote to racial problems. Considering biblical, historical, and sociological perspectives, they argue against the common justifications for maintaining racially or ethnically distinct congregations and call for a new “theology of oneness.” Chapters five, nine and ten are particularly helpful, offering examples, models, and possibilities for multiracial churches. 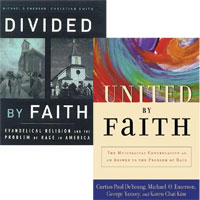 These books call for serious reflection on issues of race and religion and a humble acknowledgement that racism is more complex and insidious than we imagine. Indeed, Emerson and Smith suggest the sense of urgency that propels many churches to “do something” works against effective, holistic solutions. These books have sparked new conversations across the church.

Of particular note is a Christianity Today article, “Harder than Anyone Can Imagine,” in which four pastors of different ethnic backgrounds reflect on the issues raised by these books. Two other helpful articles are Multiracial Congregations in America and Hues in the Pews. Both are available online through the Hartford Institute for Religious Research.

Divided by Faith is available online at Cokesbury and Amazon.

United by Faith is also available from Cokesbury and Amazon.