Imagine being a young girl and learning from the cousin who raised you that your ethnic community is going to be annihilated. The one person who can stop the annihilation is the king. You just happen to be a part of the royal harem. But, unfortunately, the king has not called you into his presence for 30 days. If you try to see the king without being called, it could mean your death.

Esther’s story teaches us that we need to face difficult decisions honestly, thinking through all the ramifications. But most of all, we learn from Esther that we need to be creative and brave enough to move out of our comfort zones.

What can we learn from Esther’s brave actions in the face of this dilemma? Many aspects of Esther’s story are troubling — King Ahasuerus’ banishment of Vashti, the crass beauty contest that brings Esther and other beautiful young virgins into his harem, and the seeming willingness of Mordecai to exploit Esther’s beauty and access to the king. It is a story that in many ways turns on a very traditional understanding of female roles and influence. But I believe there is more to the story. Esther’s capacity for innovative and creative leadership, even when stuck between this rock and a hard place, offers positive leadership lessons as well.

When Esther hears about her cousin Mordecai in sackcloth at the king’s gate her first response is to send clothes. This response is interesting because it is a way of avoiding the real issue. Growing up in the Jewish culture, Esther would have known Mordecai’s behavior was a form of mourning. Yet she does not ask Mordecai why he laments. She responds by simply sending clothes — a response that avoids dealing with the real issue. While most of us do not like confronting uncomfortable situations or unpleasant individuals, the truth of the matter is, at some point, we have to deal with the real issue. Esther finally sends Hathak to find out what’s disturbing Mordecai. Mordecai shares the king’s edict calling for the destruction of the Jews. He beseeches Esther to go to the king and try to persuade him against it. Hathak reports all this back to Esther.

A turning point in the story comes in the middle of chapter four. Esther begins to perceive her dilemma differently and understand she must play a more influential role. The circumstances do not change, but the way she sees the circumstances changes. Up to this point in the story she has been in a reactive posture, but now she begins to recognize her own agency. At first, Mordecai is still in charge and directing Esther. By verse 15, the roles reverse, and Esther instructs Mordecai to lead the community in a three-day fast. Esther instructs Mordecai and others in her community to fast for three days and nights. Then she states that she and her attendants will do the same. This time of fasting leads to the development of her plan to reverse fate. Esther does not dwell on being stuck in troubling circumstances, but on shaping a new future.

Concern for the broader community

Initially, Esther understands her mission from the perspective of a palace insider. But circumstances compel her to shift from an insider mentality to one that considers the well-being of the broader community. This was no doubt a scary change for Esther, but the key practice of fasting helped Esther embrace the change. She sees herself as an essential part of God’s plan for her community. Her thinking moves from the customary and safe to creative and bold. Esther teaches us that it can be liberating to break free of the constraints of the status quo, even if they are comfortable. There is something biblical about stepping out in faith!

Esther’s initial response is grounded in her instinct for self-preservation. Approaching the king without being summoned would put her in great danger. She realizes her very life is at risk if she moves forward with the plan of seeing the king. Mordecai counters Esther’s response by pointing out that just because she is safe in the moment does not mean she will always be safe. Esther hears this and decides to act boldly. She is willing to take the risk even though she is unsure of the outcome. This is not risk-taking for its own sake but taking a risk for the sake of a larger purpose. Esther discovers that even amidst her adverse choices there is a possibility for moving ahead boldly. Realizing that to rescue herself and her community she needs to think outside the box, she comes to embody “for such a time as this” in ways that Mordecai probably never imagined.

Esther must play various leadership roles to move the community forward. She understands her role as a part of the royal court. She has been given a privileged position, but one that requires her to follow protocol. By the end of the chapter four, she has taken on a more challenging and risky leadership role of an astute advisor to the king. She uses her influence to set the stage. She does not immediately ask the king to save her people. First, she asks the king to come to a banquet with Haman. It is important to note that Esther could have been distracted from her goal when the king twice says to her, “What is your request? Even up to half the kingdom, it will be given to you” (Esth 5:3, 6). What a powerful temptation to forget her goal! Twice, the king offers her as much as half his kingdom, but she does not allow herself to be distracted from what she hopes to accomplish for her community.

Esther’s story teaches us that we need to face difficult decisions honestly, thinking through all the ramifications. But most of all, we learn from Esther that we need to be creative and brave enough to move out of our comfort zones. 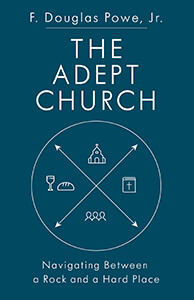 This article is adapted from The Adept Church: Navigating Between a Rock and a Hard Place (Abingdon Press, 2020) by F. Douglas Powe, Jr. Used by permission. The book is available at Cokesbury and Amazon.

F. Douglas Powe, Jr., is director of the Lewis Center for Church Leadership and holds the James C. Logan Chair in Evangelism (an E. Stanley Jones Professorship) at Wesley Theological Seminary in Washington, DC. He is the author of The Adept Church: Navigating Between a Rock and a Hard Place (Abingdon Press, 2020), available at Cokesbury and Amazon. He is also co-author with Jasmine Smothers of Not Safe for Church: Ten Commandments for Reaching New Generations (Abingdon Press, 2015), available at Cokesbury and Amazon. His previous books include New Wine, New Wineskins: How African American Congregations Can Reach New Generations; Transforming Evangelism: The Wesleyan Way of Sharing Faith; and Transforming Community: The Wesleyan Way to Missional Congregations.