In their book Better Together: Making Church Mergers Work (Jossey-Bass, 2012), Jim Tomberlin and Warren Bird examine the recent wave of church mergers. The book makes the bold claim that mission-driven mergers have the potential to transform the church world by expanding the impact of strong churches while revitalizing plateaued or declining churches.

Mergers today succeed when there is a united, compelling vision and mutual desire for missional outreach — not just the imperative of institutional survival.

Their research reveals some noteworthy facts and trends:

Merging to thrive not just survive

Be clear that the authors do not advocate the all-too-familiar model of merger in which two struggling churches combine in a last-ditch effort to stay afloat. With survival as the overriding goal, the focus in these mergers usually remains inward, with each congregation jockeying to maintain its identity and influence within the union. Alice Mann, author of Can Our Church Live? (Alban, 1999), observes: “Often, merged congregations spend a lot of time deciding whose candlesticks will be used at Christmas and not much energy asking ‘Who lives in this community and how could we reach them?’” This merger paradigm, which Tomberlin and Bird label the “intensive care” model of merger, almost always fails because it seeks to maintain the status quo.

Instead, the authors see promise in mergers where at least one partner is healthy and growing. This “lead church” contributes its healthy DNA to the union, establishing the cultural pattern for the combined church. The “joining church” typically comes to the union having reached the point of accepting that the pain of change is less than the pain of remaining the same. In successful mergers, both leading and joining churches must be prepared to undertake risk and change. Yet Leadership Network research suggests that merged congregations that maintain multiple campuses have a higher rate of success and satisfaction than churches that merge into a single location.

The new wave of church mergers is fueled by a variety of motives. For a struggling congregation, it can be a way to find renewed vitality or to sustain its legacy by using its assets to support a shared ministry. Some larger congregations seek space for growing ministries or a strategy for jumpstarting a multi-site presence. Others see merger as a way to expand their reach into the community or to become more diverse by developing a multi-ethnic presence. In other situations, mergers can be a way to expand the influence of strong leaders or facilitate pastoral transitions. Shared ministry has the potential to increase resources, lower overhead and personnel expenses, and increase outreach. 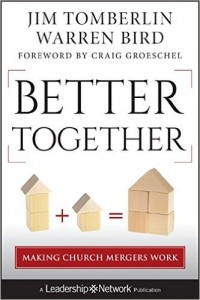 Regardless of the motives for considering merger, Tomberlin and Bird maintain that mergers today succeed when there is a united, compelling vision and mutual desire for missional outreach — not just the imperative of institutional survival. A mission-driven merger is motivated by the desire to serve better the community and to extend the reign of God. The merging congregations must ask if they can accomplish more together than separately for the glory of God.

The specific merger strategies and recommendations in Better Together may not fit the denominational polity or congregational context of every church considering merger. But in outlining a positive framework for viewing the missional potential of mergers and emphasizing the importance of a shared vision, the book provides hope, inspiration, and meaningful advice to any church wondering whether merger may be the way God is leading them forward.

Better Together by Jim Tomberlin and Warren Bird is in the Leadership Network Series published by Jossey-Bass and can be purchased through Amazon or Cokesbury.