In their new book, Beyond Megachurch Myths (Jossey-Bass, 2007), Hartford Seminary Professor Scott Thumma and Leadership Network executive Dave Travis debunk many of the common misconceptions about the “mega” movement in U.S. Christianity. Nine central chapters expose some commonly held biases about megachurches — that, for example, all megachurches are the same, that they are not grounded in orthodox Christian teachings, and that they impact negatively on neighboring congregations. In tackling these misconceptions, the text presents megachurches as intentionally diverse, theologically sound, socially concerned, and rapidly growing contemporary manifestations of the church.

Instead of deriding these mega worship centers as threats, we should find ways to learn from these churches and partner with them for real Christian change in a world that is dominated by plurality and competing voices.

Relying heavily on data from the Faith Communities Today (FACT) surveys conducted by the Hartford Institute for Religious Research in 2000 and 2005, and on their own personal observations, the authors seek to present a more realistic picture of the U.S. megachurch and its role in 21st Century Christianity. Focusing their work on American Protestant churches that average 2,000 or more attendees in their weekend worship services, they offer a perspective on megachurches that differs radically from commonly held notions.

Thumma and Travis conclude that this movement of mega proportions is a positive one for the faith. Megachurches provide variety and present the Gospel in more modern ways. They are much more intentional in achieving diversity, goals for ministry, attendance marks, and even participation in ministry. The implications are clear: instead of deriding these mega worship centers as threats and bastions of exclusivity, local congregations and denominations should find ways to learn from these churches and partner with them to strategize for real Christian change in a world that is dominated by plurality and competing voices.

There are, however, some areas of concern related to this philosophy that the text does not fully address. The most glaring of these is the theological role of the church. The authors see the megachurch phenomenon as a constructive response to the yearning in U.S. culture for ever more choices — large scale malls, ready to consume food, quick and to-the-point service. More traditional models of church have not adequately 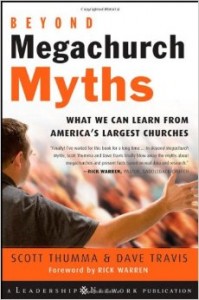 addressed these trends, and as the research reflects, they are being left behind. Megachurches represent a creative adaptation to the societal shifts that have occurred since the 1970s.

The danger in this logic is that some will not take into account the theological tension that exists in the church as it seeks to be responsive to a changing culture without becoming captive to the culture’s values. Most megachurch leaders live in that tension, not perfectly, but with integrity. The question for congregations of all sizes is, “What does God intend for this church?”

Despite the lack of depth in exploring theological implications as strongly as the sociological issues, Beyond Megachurch Myths provides a fresh perspective on the real nature of the megachurch movement. It can help congregations, churches, denominations, and neighbors who are wrestling with this phenomenon to be better informed and bring positive change into their own communities of faith.

Beyond Megachurch Myths (Jossey-Bass, 2007) by Scott Thumma and Dave Travis is available through Amazon or Cokesbury.

Asa Lee is president of Pittsburgh Theological Seminary. Previously, he served as Vice President for Campus Administration and Associate Dean for Community Life at Wesley Theological Seminary. He is an ordained Baptist minister and has served congregations in Maryland and Northern Virginia.