The Super Bowl in January had the highest viewing audience ever — a record of over 114 million. Those who attended the first Super Bowl would have found it hard to imagine what a cultural phenomenon this sporting event would become. The site for that first Super Bowl was selected six weeks before the game, and the date was set about a month ahead. Perhaps it is no wonder that there were empty seats.

Great leaders … make mistakes along the way just like their colleagues. The difference is that great leaders are those who learn from their failures.

Despite the build up to the Super Bowl each year, many games have been less than thrilling. But the 2015 game was not one of those. The game was decided only at the very end and by a Seattle Seahawks play that many questioned. Near the goal line, Seattle threw a pass that was intercepted, sealing a win for the New England Patriots. “Why take a chance on a pass when you have such a dependable powerful running back available to score the touchdown?” many asked.

Carroll said such disappointments or failures are always with him, not just this latest and biggest one. He immediately recalled a similar situation when he was coaching at the University of Southern California with only 19 seconds left in the game. What they tried did not work, and his team lost. These occurrences “have stayed with me over the years.”

In fact, some employers routinely ask candidates in job interviews to describe a success and a failure and what they learned from each — and then the interviewers ask that the candidate repeat the sequence multiple times. They report that the strongest candidates have no problem recounting failure after failure as if each happened yesterday, and they could clearly identify what lessons they learned or practices they changed as a result. On the other hand, the weakest candidates usually can think of one failure, but then have great difficulty recalling more such problems to describe to the interviewers.

Leaders look to past mistakes for the sake of their future leadership. One iconic moment from this past Super Bowl occurred when the Seattle pass was intercepted and the game lost. The camera on Pete Carroll showed him drop his upper body parallel with the ground in response. In his interview about that moment, Carroll said that “as soon as I stood up, I was looking to the future.” That is the companion trait of leadership. While the past is ever in our minds, our direction is constantly toward the future. 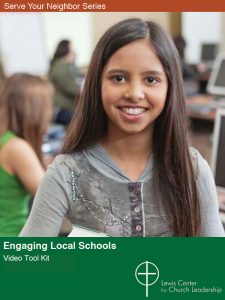 Learn How to Partner with Your Local Schools

Our local schools provide many opportunities for mission within our own neighborhoods, and increasing numbers of churches support their local schools through ministries large and small. If your congregation is considering a school-focused initiative, check out our Engaging Local Schools Tool Kit. Learn more and watch introductory videos now.