You are at:Home»Leading Ideas»Clergy Age Trends Give Cause for Concern

Lovett H. Weems, Jr., highlights some of the findings in the Lewis Center’s annual Clergy Age Trends report. Of note is a major downturn in the number of elders under 35. He also identifies the United Methodist conferences that are attracting larger numbers of young clergy.

For over 10 years, the Lewis Center in partnership with Wespath Benefits has reported annually on the changing age trends among United Methodist clergy in the United States. This research examines elders, deacons, and local pastors. The 2019 report reveals one major change — a dramatic decline in the number of young elders.

Dramatic decline in the number of young elders 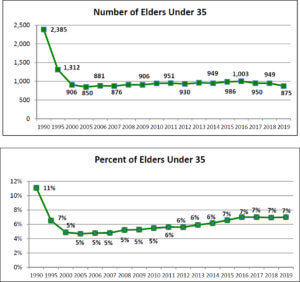 Not only did the number of elders under 35 decline for the third consecutive year, the decline in 2019 is the largest since these reports began in 2005. In addition to the unprecedented size of the decline, another difference is that the losses came proportionately among men and women, while in previous years the losses have come primarily from female elders. The 2019 decline among men means there are fewer male elders under 35 than at any other time for which we have records. Similarly, there are fewer young female elders than any year since 2008.

Interestingly, due to the overall decline in the total number of active elders in the United Methodist Church, the percentage of active elders who are young remains around 7 percent, up from the record low of 5 percent in 2005.

While the number and percentage of middle-aged (ages 35 to 54) United Methodist clergy (elders, deacons, and local pastors) have declined significantly in recent years (from 65 percent of all elders, for example, in 2000 to 37 percent in 2019), it is the one age group that comes closest to matching their presence in the general population: 42 percent of people ages 25 to 72.

Young clergy are not necessarily better clergy, but they are younger and that matters. The need to encourage the young to hear and respond to God’s call for their lives, including the called to ordained ministry, is paramount.

Just the reverse is true for older United Methodist clergy. People in the 55 to 72 age group constitute 34 percent of the general population but are more highly represented in clergy because from 47 percent to 58 percent of clergy — elders, deacons, and local pastors — are in this age group.

It is difficult to know all the causes of the dramatic recent decline in the number of young elders. The reasons are probably many. Current denominational tensions do not help. However, the need to encourage the young to hear and respond to God’s call for their lives, including the called to ordained ministry, is paramount. While clergy of all ages bring distinctive gifts to the practice of ministry, when one age group is significantly lower than their presence in the population, the future is less likely to be positive. With all their limitations of experience, the young see the world and the church through new eyes, bringing enthusiasm, idealism, and fresh perspectives to the practice of ministry. Young clergy are not necessarily better clergy, but they are younger and that matters.

Much more information is available in the complete Clergy Age Trends in the United Methodist Church 2019 report, which is available for download free of charge. The full report includes detailed data for every annual conference.