You are at:Home»Leading Ideas»5 Essential Practices of a Hero-Making Leader

Dave Ferguson and Warren Bird say that effective leaders focus less on being the hero themselves and more on making other people heroes in God’s unfolding story. This hero-making approach to leadership development is rooted in Jesus’ ministry and rests upon five essential mindset shifts that build the kingdom through the power of multiplication.

The growth of God’s kingdom — all of God’s collective work around the world — seems to be in direct proportion to the number of called, trained, empowered “harvest hands,” as The Message translates Luke 10:2. So Jesus not only involves others in the mission, but he multiplies himself through others. And he tells them each not to pray for just one more worker but rather to ask the Lord of the harvest that the workers be many. Jesus was a hero maker, and his example challenges us to be the same.

With these five practices, God will use you to change the world. Each practice depends on your willingness to ask continually, “Am I trying to be the hero, or am I trying to make heroes of others?”

This is a shift in thinking, and if you want a quick slogan for this practice, it’s “Think it!” You move from thinking that the best way to maximize ministry is through your own efforts to understanding that it is through developing the leadership of others. We see this in the life of Jesus in Acts 1:8. When Jesus cast a vision for taking the gospel to the ends of the earth, he tells his followers, “You will be my witnesses” to explain that he is going to do something through them. Jesus didn’t think the mission was going to happen just through him during his time on earth; he thought it would happen through others who would equip others who would equip still others. Jesus practices multiplication thinking.

This is a shift in seeing, and if you want a quick slogan for this practice, it’s “See it!” You will take the focus off your leadership and begin to see the leadership potential in the people all around you. Since you see the people around you as leaders in development, you will begin to lead with a yes and give them permission to engage fully in the mission. We see this in the life of Jesus when he says to a group of ragtag working-class fellows, “Come, follow me” (Matt. 4:19). They never expected a rabbi to see them worthy of teaching and leading. But Jesus saw in them a group that could change the world.

This is a shift in sharing, and if you want a quick slogan for this practice, it’s “Share it!” You will begin to not only share what you know to help others follow Jesus but also share your life and invest in the development of leaders who do the same for other leaders. We see this in the life of Jesus as he spent three years primarily with 12 people (John 2:22).

This is a shift in blessing, and if you want a quick slogan for this practice, it’s “Bless it!” You will not just ask God to bless the gifts he has given you but ask him to bless the leaders you have developed as you send them out at the end of their apprenticeship. The most obvious example of this is in Matthew 28:16-20; Jesus is turning over the leadership of the movement to his closest followers, and he tells them, in effect, “I have all authority and will use it through you as you go!”

This is a shift in counting, and if you want a quick slogan for this practice, it’s “Count it!” You are no longer concerned only with who is showing up at your thing; you count who is doing God’s thing! Jesus told his followers in simple terms, “Seek first the kingdom of God” (Matt. 6:33 ESV). They heeded this admonition, and all that mattered was what God was keeping track of as the Jesus mission was being advanced around the world.

While hero makers are continually implementing all five of these practices in their leadership, the practices are used sequentially in the development of an individual apprentice. If you are new to hero making and are mentoring someone for the first time, you will want to start with multiplication thinking, then go to permission giving, and then disciple multiplying, gift activating, and kingdom building. There is a logic in the way these practices are ordered that will allow you to do the work of hero making. 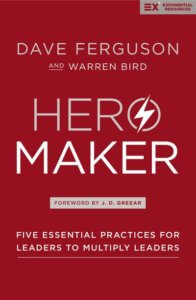 Taken from Hero Maker: Five Essential Practices for Leaders to Multiply Leaders. Copyright © 2018 by Zondervan. Used by permission of Zondervan.

Dave Ferguson (daveferguson.org) is lead pastor of Chicago’s Community Christian Church, a multisite missional community. He is also the visionary for New Thing, an international church-planting movement, and president of the Exponential Conference.

Warren Bird, Ph.D., is Vice President of Research and Equipping for the Evangelical Council for Financial Accountability. He is also a Senior Fellow at Leadership Network.