You are at:Home»News»Funeral Tribute to Martin Luther King, Jr., by L. Harold DeWolf 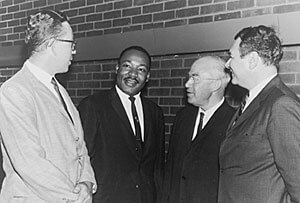 It was my privilege to teach Martin Luther King, to march with him in Mississippi, agonize and pray with him in the midst of the worst violence at St. Augustine, to spend many hours counseling with him, to go through great volumes of his private papers organizing them, to spend many days and nights in his home. I know the innermost thoughts of this man as deeply as I know that of any man on earth. It has been the highest privilege of my life, this personal friendship.

Martin Luther King spoke with the tongues of men and of angels. Now those eloquent lips are stilled. His knowledge ranged widely and his prophetic wisdom penetrated deeply into human affairs. Now that knowledge and that wis­dom have been transcended as he shares in the divine wisdom of eternity.

The Apostle Paul has told us that when all other experiences and virtues of humanity have been left behind, faith, hope and love remain. But the greatest of these is love.

Martin exemplified all three in the rarest intensity. Amid the tempes­tuous seas and treacherous storms of injustice, hate and violence which threat­ened the very life of mankind, his faith was a solid, immovable rock. He received hundreds of threats upon his life, yet for 13 years he walked among them unafraid. His single commitment was to do God’s will for him; his trust was in God alone.

On that rock of faith God raised in him a lighthouse of hope. No white backlash nor black backlash nor massive indifference could cause him to despair. He dreamed a dream of world brotherhood and unlike most of us he gave himself absolutely to work for the fulfillment of this inspired hope. In that light­house of hope, God lighted in Martin a torch of love. He loved all men. Even the hate-filled foe of all he represented he tried sympathetically to understand.

He sought to relieve the slavery of the oppressors as well as that of the oppressed. While overborne by incredible pressures upon his time and energy he yet had time to bring comfort and counsel to a bereaved boy he had never seen before or to park a car for a confused woman who was a complete stranger.

What a legacy of love is left to his faithful and gifted wife and these four dear children. They now share his dream, his faith, hope and love — they and the faithful little band of nonviolent crusaders who have been unfailingly with him from Montgomery all the way to Memphis. They are too few, they who have already made such a costly sacrifice.

It is now for us, all the millions of the living who care, to take up his torch of love. It is for us to finish his work, to end the awful destruction in Vietnam, to root out every trace of race prejudice from our lives, to bring the massive powers of this nation to aid the oppressed and to heal the hate-scarred world.

God rest your soul, dear Martin. You have fought the good fight. You have finished your course. You have kept the faith. Yours is now the triumphant crown of righteousness, Your dream is now ours. May God make us worthy and able to carry your torch of love and march on to brotherhood. Amen.