You are at:Home»News»Dinner and Symposium Honor the Ministry of Lovett H. Weems, Jr. 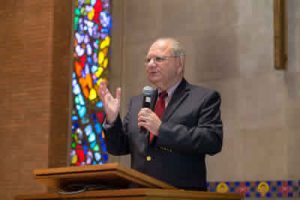 Wesley’s Lewis Center for Church Leadership hosted a dinner and symposium earlier this fall to honor Dr. Lovett H. Weems, Jr. The gathering provided an opportunity to thank Weems for his contributions to the seminary and to raise support for the scholarship that will rightfully bear his name. Many honored guests and notable speakers were present to share stories and sing praises of Weems’ life and work.

Dr. G. Douglass Lewis, past president of Wesley and the man for whom the Lewis Center is named, addressed those gathered for the dinner. He recounted that the lifelong ministry of Weems began in rural Mississippi where he served as a local church pastor in multi-church charges in his earliest years. Though Weems’ congregations were small, his work — marked by emphasis on both evangelism and social concerns–soon caught the eye of many in denominational leadership. At that time, Lewis was Wesley’s new president and was on the hunt for a vice president for development.

Weems was already known as a “Boy Wonder,” Lewis said. “Like me, he had no experience in fundraising, but he had the essentials to take on the job. One thing is certain. Never, never, ever count out Lovett Weems. When there’s a challenge to be met, a mission to be filled, a task that very few would take on, Lovett Weems is the person for the job.”

Lewis was not the only person who saw this capacity in Weems. Weems’ resolute work for Wesley bookends a remarkable stint as the president of Saint Paul School of Theology in Kansas City, Mo. He remained there for 18 years until President David McAllister-Wilson recruited Weems back to Wesley to become the founding director of the Lewis Center.

Under Weems’ leadership, the Center gained an international reputation for producing cutting-edge resources for both clergy and lay persons. “When we established the Center 14 years ago, our hope was it would become the go-to place for the church for best practices in church leadership,” McAllister-Wilson said in a press release earlier this year.

Dr. F. Douglas Powe, Jr., current director of the Lewis Center, confirmed that Weems brought McAllister-Wilson’s hope into reality. “Lovett has made the Lewis Center an internationally known center,” Powe said. “He has helped to build a constituency through Leading Ideas, the Lewis Fellows and Lewis Community Leadership Fellows, and his work with conferences and denominations. His work is second to none in church leadership. We owe Lovett quite a debt for where he has placed church leadership at this time.”

Today the Lewis Center remains the trusted resource around the globe for church leadership ideas, research, resources, and training so that congregations and denominations thrive, grow, and serve God and their communities.

When the announcement came that Weems would be transitioning out of the role of director and into the role of senior consultant, the idea emerged that a scholarship should be established in his name.

Among the donors to the scholarship fund are many younger clergy who participated in the Lewis Fellows program — a Lewis Center initiative that provides clergy under age 35 with intensive leadership training, peer learning, and support. Since 2005, more than 250 exemplary young clergy serving in over a dozen different denominations have benefited from this program. Lewis Fellows alumni and alumnae contributed over $30,000 to the fund, which will help support the continuation of this popular program.

One contributor was Rev. Bill Brunson, pastor of the Vestavia Hills United Methodist Church in Alabama, who participated in the Lewis Fellows program ten years ago. “It was a joy to give in honor of Lovett,” he said. “Like many people, I would not be where I am today if it weren’t for the teaching, advice, and encouragement of Lovett Weems.”

Weems was delighted by the turnout of both the dinner and symposium. The quick and generous response of so many has already helped raise more than $650,000 for a scholarship honoring Weems’ work to aid those seeking to grow as leaders.

“I am deeply honored by the response of so many to provide scholarship funds to equip church leaders to lead congregations to greater service, vitality, and growth,” Weems said. Wesley is still receiving gifts, working toward a goal of $1 million. You can help by making a gift here.

The Lewis Center for Church Leadership would like to thank those who participated in the dinner and symposium appropriately titled, “Take the Next Step,” after Weems’ most popular book. To learn more about the Lewis Center or to sign up for its renowned Leading Ideas, visit their website.

This article originally appeared in the November 2017 issue of e-Calling from Wesley Theological Seminary.

Stephanie Remington is an ordained elder in the United Methodist Church and has more than 15 years of pastoral leadership experience in the local church. She served as research manager for the Lewis Center for Church leadership in 2017 and 2018.