For several decades now, many have watched in amazement as churches grew far larger than had been the norm previously in the United States. While many were independent, quite a few developed within traditional denominations. One of the most notable is the United Methodist Church of the Resurrection in Leawood, Kansas, a suburb of Kansas City, Missouri. From a handful of worshipers meeting in a funeral home in 1990, Resurrection has grown to be one of the largest Protestant congregations in the country. Since my family has been a part of the congregation from its early years, I have had a chance to watch its development under the leadership of Adam Hamilton, a most remarkable pastoral leader.

As important as it is to “name the elephant in the room,” no church can become more effective in reaching younger people unless it is in for the long haul and willing to engage younger people around the hard issues they bring.

Many of these very large churches developed out of a model of ministry well suited to Baby Boomers. Indeed, Adam Hamilton, born in 1964, represents the very youngest edge of the Baby Boom generation. While successful by many measures, Resurrection and many other large churches have recognized that they are not reaching those in their 20s and 30s as well as in the past.

The uncomfortable reality is that younger people have problems with the church today that include, but go far beyond, matters of worship style and music. Many young people are deeply uncomfortable with what they think the church represents. Building on findings reported in the book unChristian by David Kinnaman, Adam Hamilton preached a sermon series on “When Christians Get It Wrong.” I heard most of these sermons as they were preached. Doing this series took courage. Adam named sore spots for youth about the church, and in doing so, he laid bare some all-too-common church practices and attitudes.

A sermon series alone makes little difference if it takes place in isolation from other efforts. Clergy routinely think they have done something on an issue because they have preached on the topic. The preaching may do 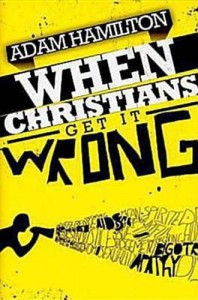 some good, but not much if unconnected to other less public initiatives. The series became the opportunity for direct communication with young people. Video clips featuring the perspectives of younger persons gave them
a voice in the sermons. During the series, discussion groups were held. These groups and other follow-up efforts built on the momentum of the series.

As important as it is to “name the elephant in the room,” no church can become more effective in reaching younger people unless it is in for the long haul and willing to engage younger people around the hard issues they bring.

Adam’s sermon series is available as a book from Abingdon Press under the same title, When Christians Get It Wrong, available from Amazon and Cokesbury.