Amanda Poppei’s Washington, DC, congregation is engaged in an anti-racism effort aimed at countering racist assumptions embedded in their congregational life and practices. This effort led them to rethink how to tell the story of a recent capital campaign in a more inclusive way that honored the contributions of many throughout the history of their building.

For the past several years, the Washington Ethical Society, a humanist congregation in the District of Columbia, has been intentionally focused on anti-racism work. We are examining how racism functions within our own congregational practices. This systematic effort is assessing every aspect of congregational life from leadership recruitment and hiring to worship resources and the types of images present in the building. Our goal is to identify, name, and counter implicit racist assumptions and practices.

Instead of mounting a tree on the wall with engraved leaves honoring mostly rich white donors, we were able to tell a much fuller, more inclusive story of how the congregation understood its relationship to its building.

One practice that came to our attention was how the congregation recognized donors. After completing a successful capital campaign, we wanted to celebrate our accomplishment. But through the lens of our anti-racism effort, some of the traditional ways of honoring donors didn’t seem quite right. We got feedback early in the process that people wanted to see not a list of people’s names, but rather the stories of generosity behind those names.

We chose to expand our focus and think about the whole history of how the congregation had lived in and supported its building space. We started with a decision to highlight the history of the founding of the congregation, when three men — two white and one black — came together to create the congregation. One of their early struggles was to find suitable meeting space in the then-segregated District of Columbia. In another chapter of its history, the congregation undertook a building project. They made a purposeful decision not to employ union labor because at that time the carpenters’ unions were still segregated. We found the photo from the building site and declared it an equal opportunity employment site! We shared stories of the justice work that had happened in the building and we described the memorials that were part of the walls and gardens. 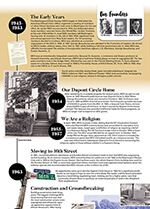 To celebrate our most recent capital campaign, we settled on an exhibit that included this whole history. Instead of mounting a tree on the wall with engraved leaves honoring mostly rich white donors, we were able to tell a much fuller, more inclusive story of how the congregation understood its relationship to its building.

Our anti-racism work opened our eyes to how a common, congregational practice can reinforce racism (and, in this case, classism). And it helped us be more honest and inclusive in honoring the history of support for our building.

Amanda Poppei is Senior Leader of the Washington Ethical Society, a humanist congregation In Washington, DC. Ordained in the Unitarian Universalist tradition, she is a graduate of Wesley Theological Seminary and participated in the Lewis Fellows program for young clergy in 2011-2012