Efrain Agosto’s new book, Servant Leadership: Jesus and Paul (Chalice Press, 2005), reminds us that leadership is inherently contextual and relational. Forgoing character study, he concentrates on how Jesus and Paul related to others, particularly other leaders, and situates their leadership in the context of the first century’s social, political and economic climate.

Leadership must be understood through the lens of core New Testament values — service and humility, love and justice, suffering and sacrifice. Gospel leadership is diverse and egalitarian, self-less and communitarian, hard-working and tenacious, and perhaps most importantly, spirit-led.

Examining Jesus’ mission through the lens of class conflict, Agosto’s voice resonates with liberationist tones. He understands Jesus as leader of a renewal movement among the oppressed. Similarly, he views Paul’s reversal of classical leadership expectations as empowering to women and those from lower social strata. “To invoke the name of God and not call for justice to the neglected masses,” writes Agosto, “is to shortchange a Christological definition of leadership.”

Servant Leadership is an in-depth piece of scholarship, examining both the synoptic tradition and the Pauline corpus. Despite this ambitious scope, Agosto approaches the task with exegetical precision and thoroughness. He focuses on certain textual categories — commissioning texts; instruction of the disciples; Jesus’ critique of the established leaders of his day; Paul’s defense of his apostleship; and the commendation of coworkers found in Paul’s epistles. Identifying these elements of the tradition as central to the leadership question is one the book’s major contributions. 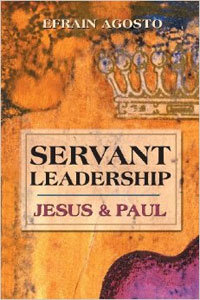 Pointing out that both Jesus and Paul “refused to work alone,” Agosto underscores throughout the book the importance of team work. The fifth chapter on Paul and his co-workers is particularly fruitful as a study of the interactive nature of early church leadership. It discerns Paul’s leadership criteria by examining how he describes the qualities of other Christian workers in the often-overlooked “commendation” passages.

Agosto’s analysis suggests that leadership must be understood through the lens of core New Testament values — service and humility, love and justice, suffering and sacrifice. What emerges is a portrait of “Gospel leadership” as diverse and egalitarian, self-less and communitarian, hard-working and tenacious, and perhaps most importantly, spirit-led. “Gospel leadership” stands in sharp contrast with the hierarchical, self-aggrandizing leadership prevalent in the first century world — and in our world today. By defining leadership as “Gospel leadership,” Agosto challenges the 21st century Christian community to understand that the practice of leadership is an act of faith.

Servant Leadership (Chalice Press, 2005) can be purchased through Amazon.

Ann A. Michel has served on the staff of the Lewis Center for Church Leadership since early 2005. Currently, she works as one of the co-editors of Leading Ideas e-newsletter. She also teaches at Wesley Theological Seminary in the areas of stewardship and leadership. She is the co-author with Lovett H. Weems Jr. of Generosity, Stewardship, and Abundance: A Transformational Guide to Church Finance (Rowman & Littlefield, 2021) available at Cokesbury and Amazon. She is also the author of Synergy: A Leadership Guide for Church Staff and Volunteers (Abingdon, 2017), available at Cokesbury and Amazon.