You are at:Home»Leading Ideas»Review of What’s Theology Got to Do With It?: Convictions, Vitality, and the Church

Robinson attempts to show specific connections between core theological beliefs and the practices of healthy congregations.

What makes this book unique is what Robinson does next. Robinson attempts to show specific connections between core theological beliefs and the practices of healthy congregations. These core beliefs include revelation, canon of scripture, the Trinity, God as creator, the person and work of Jesus Christ, the Holy Spirit, the image of God and original sin, justification and sanctification, Church, the sacraments, the calls of clergy and laity, and eschatology.

Three of Robinson’s many intriguing speculations are these. First, there is a connection between a 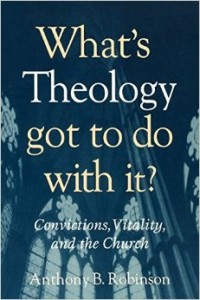 Robinson invites us to seek out and strengthen such connections. Not everyone will agree on those he names but most will appreciate his final goal, which, to use one of his favorite metaphors, is the congregation as spelunker – able to enter the dark recesses of the unknown because they are anchored by a rope to a fixed point outside the cave.

Lewis Parks is Professor of Theology, Ministry and Congregational Development at Wesley Theological Seminary. He pastors Calvary UMC in Lemoyne, PA, assists denominational leaders around vitality in small churches and is author of several books, including Small on Purpose: Life in a Significant Church (Abingdon Press, 2017) [Cokesbury | Amazon].