You are at:Home»Leading Ideas»Promise and Peril: Understanding and Managing Change and Conflict in Congregations

In Promise and Peril (Alban, 2009), David Brubaker tackles the conundrum churches face: Change usually leads to conflict, but change is required to make progress. Drawing upon research with congregations over five years, Brubaker found that about 10 percent of churches each year face conflict serious enough that a special meeting has to be called to address the matter or outside help has to be engaged. What he learned does not solve the dilemma about change and conflict, but his research does make it more understandable.

About 10 percent of churches each year face conflict serious enough that a special meeting has to be called to address the matter or outside help has to be engaged.

Some changes to worship that can trigger conflict are changing the style of worship, dropping a service, or adding a service. It might seem strange that adding a service would lead to conflict, but often “the social integrity of the group is threatened” by such a move. All this is true across various sizes of churches. Brubaker captures the tension when he says that congregations “that adapt their worship services—especially by adding a new worship service—are indeed at a higher risk of conflict. But congregations that fail to adapt to a changing environment may be at much greater risk.”

So if change is essential for progress, how can change be handled in such a way as to minimize destructive 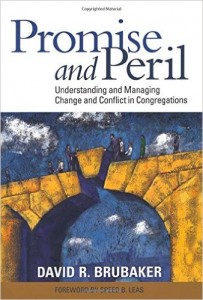 conflict that often leads to changes in leadership and members leaving? Brubaker found it of particular interest that one major change generally does not cause conflict — building projects. While there are exceptions, for the most part churches have learned well over the years some basic steps to take in embarking on a building project that help people get on board with the change. When you consider the care with which such a project is begun — listening sessions, information sharing, timelines, question sessions, etc. — one can immediately see how casually we often undertake other major efforts in the church, including changes in worship. Brubaker finds two concepts from Paul in I Corinthians that we all might use in implementing change—orderliness and love. Working carefully on the plan with a great deal of openness and transparency, along with a never failing attitude of love for all involved, just might permit change that builds up the body of Christ.