Every ministry has a lifespan, according to pastor and author Graham Standish. When a church forces dying ministries to stay alive, it prevents new ministries from being resurrected from the death of the old.

A major problem of any struggling church is that it consistently does what it’s always done before, and avoids doing what it’s never done before. Whenever a church has maintained a long-term ministry or mission — one that started with such passion, and that sustained energy for a long time — the ministry will eventually go into decline. It’s the problem of entropy. Every church, every ministry, every pastor, and every leader eventually declines.

It can be really hard to let certain ministries and missions go, but good leadership knows when to give people permission to let go. For example, when I first came to Calvin Presbyterian Church, I got to see the wonderful Easter Sunrise Service that the church had been doing for years. The youth group led it, and it had a wonderful combination of depth and humor. Each year the worshippers included members of the youth group, their families, and a few other church members.

The following year, the youth director, who also happened to be our music director, asked me if they had to keep doing the sunrise service. I asked him what the problem was. He said, “It’s mostly just the youth and their families that come, but it also makes it really hard for me to prepare for the regular Easter service. I spend so much time corralling the teens, making sure they’re organized, that I don’t really get to do much that’s creative in the regular Easter Service.”

I immediately said to him, “Yeah, go ahead. Don’t do it. We’ll make sure the Worship Committee knows.” He replied, “What are you going to do with people who complain?” I said, “I’ll invite them to organize it next year.” And that’s what happened. We had an older member complain that we weren’t doing the sunrise service, which was her favorite service. I invited her to organize it. She said, “Well, I don’t like it that much.”

We needed to let the service die for something else to come alive. The following year we added an earlier service to our normal Sunday morning routine because of the church’s growth, which made organizing for those two services harder. To still have had a sunrise service would have made Easter Sunday really stressful for the worship staff. We had to let the sunrise service die so that we could become more creative for our regular Easter services.

Letting ministries and missions die at the appropriate time allows new ministries and missions to be born and thrive. A way of thinking about this is by looking at the number of original Christian churches that still exist. Do you know the answer? The answer is none. Even those original churches died so that new ones could be born. And Christianity has been experiencing the cycle of birth, death, resurrection, new birth, life, death, resurrection ever since.

This article is excerpted from Ministry Proverbs: Lessons Learned for 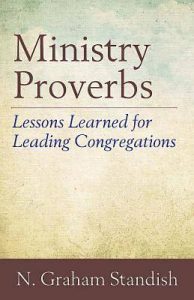 Leading Congregations (Morehouse Publishing, 2016) by N. Graham Standish. Used by permission. The book is available through Cokesbury and Amazon.