Lovett Weems reviews You Only Have to Die: Leading Your Congregation to New Life, written by Jim Harnish about a church in Florida that built a vision for its future.

Do the following characteristics describe your church? More than seventy-five years old. Clear sense of a rich past. Less clarity about the present. No vision for the future. Deeply committed members. Some effective areas of ministry. Members glad to be there. Sense of community within the congregation. Limited evidence of a desire to share the gospel with persons outside the church.

If so, you may want to read the story of such a church that found a new vision for its future by building on its past. Jim Harnish in You Only Have to Die: Leading Your Congregation to New Life (Abingdon, 2004) tells the recent journey of Hyde Park United Methodist Church in Tampa, Florida (www.hydeparkumc.org). Despite the tremendous change that took place during this process,

Harnish is clear how connected the new vision is to the past. In moving terms, he describes what happened on a feeling level for both himself as pastor and for the longtime members. For example, he kept in mind key questions that are often neglected by leaders who drive for change. Do the members feel secure? Do they know that the past is valued? Do they know that the church we are becoming is consistent with the church we have been? Do longtime members still have a place? 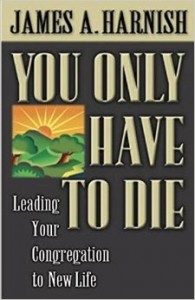 The most candid parts of the book deal with what the author learned about himself and his leadership successes and failures. He admits that in a number of ways he “blew it.” He confesses that he tended to take things too personally, let critics get to him and “lost his cool” at times, and did not always go to the source of complaints. He also names ways in which he did things right. He knew change was required for the future but never ceased to feel the pain of those for whom the change was difficult. He turned to trusted friends as a network of personal support. He asked for forgiveness when he made mistakes. He paid careful attention to history and learned to listen to some of the sages of the congregation. Some mature saints of the congregation became for him “something of a tuning fork” for his leadership. As he puts it, “I knew that they loved me and loved their church enough to search with me for God’s best will for all of us.”

You Only Have to Die (Abingdon, 2004) is available from Cokesbury and Amazon.