Not surprisingly, church consultant Clif Christopher’s new book, Rich Church, Poor Church: Keys to Effective Financial Ministry (Abingdon Press, 2012), makes many of the same points that he makes in his first book, Not Your Parents’ Offering Plate. Both books emphasize giving to mission, the importance of the pastor knowing what people give, and especially the importance of effectively thanking those who give.

Christopher says things that most people aren’t saying, which probably means that at least one thing will irritate you. The payoff is that many of the things he says will challenge you to think in new ways.

But there is new material here, as well. As a former leader of capital campaigns, I particularly appreciated his chapter “Principal, not Payments,” which deals with the importance of congregations not over-borrowing to build. He calls on congregations to pay attention not to the monthly payment, but the total indebtedness. Any congregation that has ever built big and then experienced some sort of downturn, either internal or external, knows the importance of this distinction.

In a class I teach at Luther Seminary, students read Not Your Parents’ Offering Plate. As I assign it, I always tell the students, “If you don’t find something in this book that irritates you, you aren’t reading carefully enough.” I would say the same thing about Rich Church, Poor Church. That is the value of the book. Christopher says things that most people aren’t saying, which probably means that at least one thing will irritate you. The payoff is that many of the things he says will challenge you to think in new ways. That is more than worth an irritant or two. 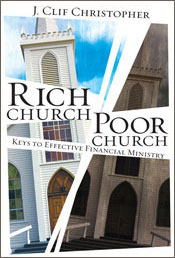 or a church council. It is set
up well for a small group to read a chapter a month. The writing style is very accessible. Each chapter is short and has a few discussion questions.

The most positive outcome of a group of congregational leaders reading Rich Church, Poor Church will be a move to an increased level of intentionality in financial stewardship ministry. Christopher will push you to look at what you are currently doing, ask how you could be doing this ministry better, and provide you with good ideas for new ways of growing generosity in the congregation.

This review first appeared in the online newsletter, Stewardship for the 21st Century and is reprinted with permission. Clif Christopher’s book Rich Church, Poor Church: Keys to Effective Financial Ministry is available through Cokesbury or Amazon

Charles R. "Chick" Lane is Pastor for Stewardship and Generosity at Lord of Life Lutheran Church in Maple Grove, MN, and a consultant with Kairos and Associates. He is also the author of Ask, Thank, Tell and coauthor of Embracing Stewardship.