You are at:Home»Leading Ideas»How One-to-One Conversations Reintroduced a Church to its Neighbors

Travis Norvell, pastor of Judson Church in Minneapolis, describes the blessing and insight that flowed from his decision to schedule 110 one-on-one conversations with neighbors and community leaders. The result was ministry more focused on what people actually need and want instead of what the church thinks they need and want.

For years I sat in my office and dreamed about what I thought the community wanted or needed. Never did I think I could just ask them.

In 2018 I heard the Rev. David Van Brakle, who at the time served as pastor of Wilmette Community Church outside of Chicago, describe how he conducted 100 one-on-one interviews with people from the community. As Judson Church’s 110th birthday approached, I thought I would like to conduct 110 conversations. I contacted David to see how he did it. His only advice was this: Start with one community/neighborhood leader, and when you end the conversation, ask the person for two or three recommendations for who you should talk with next. With this information in mind, I set out to mark Judson’s 110th year of existence by conducting 110 one-on-one interviews with community members — specifically, those who were not from Judson Church. I gave myself a year to complete this endeavor; unfortunately, the pandemic prevented me from doing the full 110. Normally I would have been upset about not reaching my goal, but the results from the conversations outweighed any feelings of disappointment.

After three or four initial interviews, I centered on these four questions.

I finished each interview by asking for permission to take their picture and asking whom they would recommend I talk to next. I conducted all the interviews in the same coffee shop.

What I learned was sobering and insightful. I learned that neighbors who live on the same block as the church had no idea where it was or anything about it! They knew where Judson Preschool was, but they had no idea a church was associated with it. One neighbor who lives within a nine-iron shot of Judson talked about how much they liked the yellow Adirondack chairs in our front yard. Two problems with that: One, we don’t have any yellow Adirondack chairs, and two, we don’t have a front yard. This neighbor mistook Judson Church for St. Luke’s Episcopal Church. In normal circumstances, mistaking a Baptist church for an Episcopal church would be the highest compliment. In this circumstance, however, it was not a compliment; it was a serious problem. The neighbor’s mistake proved to me that Judson Church had identity problems. Not only was our building not communicating our values, our building wasn’t communicating at all!

I once heard someone quote Paul Tillich, who said, “The culture asks the questions and the church provides the answers.” My research at the coffee shop proved that the church was answering questions no one was asking. I also discovered a generation of neighbors who couldn’t tell the difference between Baptists and Lutherans; not surprising, but they didn’t know the difference between Lutherans and Catholics either. In their minds, they were all part of one big institution. One neighbor did not know Christians could be pro-LGBTQIA+; another neighbor loved the rainbow flags hanging from our building, but thought we were naive Christians who did not know the symbolism of the flag and instead just liked the colors.

The conversations showed me that if Judson Church continues to venture into the neighborhood, the possibilities for growth (name recognition, trust, ministries) were endless. Because the data collected emerged from a conversation, Judson Church had the ability to go deeper than the usual ministry plan. For example, when I asked the neighbors about their worries, they freely listed their worries and fears: gentrification, rising home prices, racial disparities, youth mental health, environmental issues. All would be at the top of the list in any neighborhood in America, but when I asked if they could flesh out these fears and worries, I received pain-filled responses: “I don’t know my neighbors,” “I’m alone,” “I want my kids to be able to walk to school safely,” “I feel helpless to do anything about the environment or racial justice,” “I’m exhausted.”

Every month I would compile a list of who I talked with, what I learned, and who I hoped to talk to next and reported it to Judson Church council. At first, they didn’t believe our neighbors didn’t know anything about the church. They couldn’t believe someone thought we didn’t know what the rainbow flags meant. And they refused to believe our neighbors knew more about the playground than what went on in the church building. But each month I kept sharing these stories in emails, newsletters, sermons, and council minutes. The meeting before the pandemic ceased in-person worship, three members of the council offered, “I think I’m going to start doing this, too!”

For years I sat in my office and dreamed about what I thought the community wanted or needed. Never did I think I could just ask them. For years, the church councils and I cooked up programs and messages we thought would attract the neighbors. Never did we think to just ask them. The conversations were an exercise in slow church. They took many hours over the course of months. Each conversation took at least an hour to conduct, plus the time it took to set them up via email, texting, and phone calls. But they were worth every second. Our ministry at Judson Church is now more focused and is directed not by what we think others need and want, but by what they have told us they need and want. 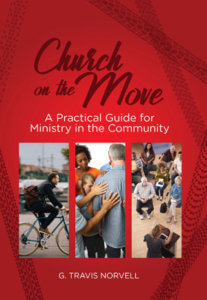 This material is adapted from Church on the Move: A Practical Guide for Ministry in the Community (Judson Press: 2022) by G. Travis Norvell. Used by permission. The book is available at Cokesbury and Amazon.

G. Travis Norvell is the pastor of Judson Memorial Baptist Church in Minneapolis, Minnesota, and an adjunct faculty member at United Theological Seminary of the Twin Cities. He is author of Church on the Move: A Practical Guide for Ministry in the Community (Judson Press: 2022). The book is also available at Cokesbury and Amazon.