During my early years of pastoral ministry at Amplify Church, developing other leaders was not a priority. I was a very different kind of pastor during my second tenure as pastor, to a great degree because of what I had learned during my years outside of ministry working in the corporate world. We had a noble goal — to make sure that the mission of the church would never be compromised due to a lack of ready leaders. A few foundational principles shaped our approach to shared leadership:

Every leader was committed to mentoring at least two people who could effectively carry out each of their key roles.

The primary role of every leader is to develop other leaders.

Leaders did not just make sure that their responsibilities were fulfilled with excellence, they were also committed to mentoring others to do the same. Mentoring was not just the pastor’s responsibility. Every leader was committed to mentoring at least two people who could effectively carry out each of their key roles. That allowed us to be “three deep” (the leader plus the two people being mentored) at every key role in the church. We built a mentoring culture by making it clear that leadership effectiveness is best demonstrated when the leader is not present. I was so pleased to hear one staff member say, “We exist to pull the gold out of people so they can fulfill their purpose.”

The leaders of tomorrow are already here.

Rather than assuming that we needed to hire new leaders from outside the church, we assumed that future leaders would emerge from those who attended the church. Every leader was engaged in “shoulder-tapping,” inviting new potential leaders to unearth and develop their God-given potential. It was common for volunteers to become part-time staff members and for part-time staff members to become full-time staff members. We paid for potential leaders to get the education and training they needed, including paying for advanced degrees for several staff members. In fact, we set approximately two percent of the church budget aside for professional development. The benefits of this approach compared with hiring external were significant. We never had a question about the individual’s passion for the vision of the church. They had already bought into the vision. We never had a question about the individual’s respect for those in church leadership. They had already been following the lead of those in positions of authority in the church. We never had a question about the individual’s sincerity and faithfulness. It had already been proven.

While leaders can learn valuable truths through many avenues, they learn best when in action. That is why “shadowing” current leaders is the primary way we developed future leaders. After watching and experiencing how a current leader fulfilled their role, future leaders tried it themselves with the support and coaching of the current leader. Positive feedback coupled with feedback for improvement prepared the future leader for excellence in fulfilling their roles — and modeled for them how they would help to develop other leaders. By the way, shying away from feedback for improvement helps no one. John Maxwell writes, “When a person’s behavior is inappropriate, avoiding confrontation always worsens the situation. First, the organization suffers because the person is not acting in its best interest. Second, you suffer because the person’s deficiencies reduce your effectiveness. And finally, when a person is acting inappropriately and isn’t told, you have robbed him of an important opportunity to learn and grow in his development process.” We made providing timely, specific feedback to our emerging leaders a high priority. It is a gift that accelerated leadership growth, effectiveness, and impact.

With these foundational principles in place, we intentionally placed emerging leaders in viable leadership roles — often before some people thought they were ready. Of course, placing proven, established leaders in key leadership roles is safer. Giving unproven leaders a platform comes with risks. Some of the leaders we empowered disappointed us. Most did not. We found that giving next generation leaders significant and visible leadership responsibilities was an important part of the equation when it came to shared leadership and developing a pipeline of leaders. 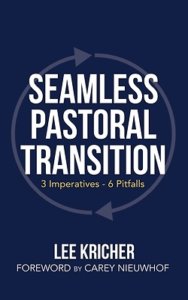 This article is adapted from Seamless Pastoral Transition: 3 Imperatives and 6 Pitfalls (Xulon Press, 2022) by Lee Kricher. The book is also available at Cokesbury and Amazon.