Roy L. Spore believes that decline and death are not inevitable for smaller rural churches. While smaller churches are often skeptical of change imposed from the outside, many find new life and energy for ministry when a new vision emerges from within the congregation itself.

Countless studies of the local church in today’s society bear out a profound truth: churches that were once dynamic and vital now suffer from an aging membership, decline in attendance, economic crises, and an absence of youth and children. This fact is especially true in rural areas, where churches tend to be small, community and family oriented, and very traditional. Each year scores of these churches close their doors, unable to counter the trends that bring about their decline, and even more fall into a downward spiral of hopelessness.

Change is all too often presented as an either-or choice and church leaders are caught up in a tug-of-war between what they have been and what others think they should become.

Yet, while this scenario seems to be the accepted norm, is it the inevitable future of these churches? Many would say “yes” to this question, citing what they believe to be the cause: a fundamental trait in smaller, rural churches, expressed in the now-trite phrase, “But we’ve never done it that way before.” There is a perception that these churches would rather die than change. Thus, while their community/neighborhood changes around them, the church seeks to remain the same, holding on tightly to the past to preserve what little they have left and guarding the traditions that they once held dear.

Must change be a tug-of-war?

While this is certainly true of some churches, it must not be taken for a general principle. The majority of churches that I have encountered would do almost anything to keep their doors open and their ministries vital. It is not that they are afraid of change: they fear that making changes will rob them of their identity and heritage, both of which have provided meaning for their lives. Change is all too often presented as an “either-or” choice and church leaders are caught up in a tug-of-war between what they have been and what others think they should become.

It is quite possible that the future of these churches does not depend on who wins this battle and that, in fact, even engaging in the tug-of-war at all may be a source of decline and despair. Perhaps the future of the small, rural church rests on a very basic understanding of who we are and what we are called to be.

We make a serious mistake when we assume that the reason for the decline of the small church is that they do not know how to “do” church. Most of these churches have endured for generations; many of them have been bastions of hope and deliverance within their communities through the hardest of times. In myriad ways, these churches have given more than they have received. We owe to them a huge debt of gratitude for being the church in places where without them there would be no guiding force within the community. Instead of dismissing their leadership as archaic and irrelevant, we should honor them as the saints, learn from them how to face hardship, and celebrate with the many triumphs of their legacy.

Much of the resistance to change encountered in smaller churches comes because implementing change implies abandoning the past. Small rural churches are not doomed to failure and death. Many of these older congregations have found a new life and a new energy for ministry by catching a glimpse of new possibilities, but that new vision is almost never imposed upon them by an outside source. In a small church, the recommendations of consultants and the strategies of judicatory emphases are generally received with skepticism and doubt. Yet when the vision emerges from within the leadership of the church, it is received in trust, especially when it reflects the heart of the congregation and members have had a voice in its emergence.

If the small church is to move into the future with a sense of hope, it must find that hope in a new vision that comes from God. Fishing in unproductive waters will seldom produce that hope. Leaders must be willing to make some changes in the way they do certain things. But they must also learn from the past, honoring their saints and their heritage, learning from them, and using the experiences of God’s work in the past to guide them into what God will do in the future. They must place their relationship with God at the heart of everything they do and learn to trust God’s leading, even if it doesn’t make sense to them or goes against the status quo. Doing this brings about a sense of partnership that inevitably leads to the presence of miracles and the inclusion of others. 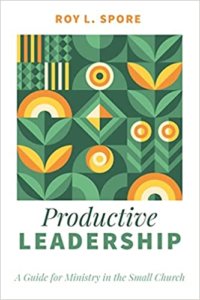 This article is adapted from Productive Leadership: A Guide for Ministry in the Small Church (Wipf and Stock Publishers, 2021) by Dr. Roy L. Spore. www.wipfandstock.com. The book is also available at Cokesbury and Amazon.

Roy L. Spore is an ordained pastor in the United Methodist Church. Currently, in retirement, he is serving part-time at Friendship UMC in Sherman, Texas. He is author of Productive Leadership: A Guide for Ministry in the Small Church (Wipf and Stock, 2021), available at Cokesbury and Amazon.