You are at:Home»Leading Ideas»All the Mainline News That’s Fit to Print

The declining influence of mainline denominations is reflected in the that they appear far less frequently in the New York Times than they did eighty years ago.

The statistical decline of mainline denominations has been well documented. Less certain is any decline in cultural influence since social impact and numbers are not always synonymous. Online resources make certain types of tracking and research much easier today than in the past. With this in mind, we set out to track the use of identifying words for several mainline Protestant denominations. During the three-month period from September through November 2002, we monitored the occurrence of four denominational identifying words—Episcopal, Lutheran, Methodist, and Presbyterian—in the New York Times. Despite its recent problems, the Times continues to be the “newspaper of record” in the United States.

Whereas mainline Protestantism once enjoyed its status as an almost unofficial established national church, today the picture is much different.  Mainline denominations are no longer at the center of the national “public square” but seem to have moved to the margins of public discourse.

Our findings were intriguing, but without similar information from other time periods, they did not reveal much. Therefore, we decided to do comparable research for the same September — November periods in 1962 and 1922, making use of more traditional research methods. The earlier two years were chosen to give several decades for comparison between our snapshots, but also because 1962 and 1922 fall at significant junctures for mainline Protestantism. The year 1962 captures a moment when mainline denominations were still growing and just before the persistent decline in membership of the last four decades began. The year 1922 depicts mainline Protestantism in an even stronger position, as almost the unofficial established church of the United States. 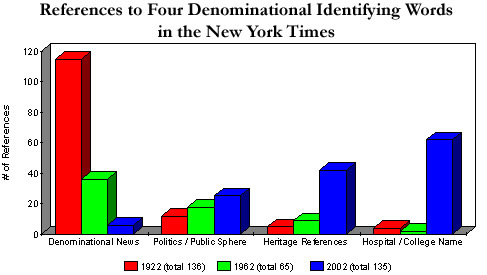 Some references were excluded from our study. We decided not to include weddings and funerals, as interesting as that comparison would be, because of difficulties in compiling comparable information for each of the years. Also, we decided to omit references to memorial services marking the one year observance of the September 11, 2001, tragedy since those observances were so numerous and atypical.

Denominational news includes reported happenings within and among denominations. Changes in this category are clearly the most noteworthy. Over this eighty-year period, the percentage of references to institutional news about mainline denominations decreased drastically from a substantial 85% in 1922, to 55% in 1962, to only 4% in 2002. Apparently, public interest in the inner workings of these churches—at least as reflected by coverage in the New York Times—waned considerably during this time period.

There is a notable difference in the character of the denominational news references between 2002 and earlier years. The 2002 references were almost entirely stories about church decline, financial difficulties, or scandals and controversies (usually related to homosexuality). While the 1962 references also included controversies, particularly one at Broadway Presbyterian Church in New York City, the majority of these references focused on the inner workings of the mainline denominations, such as the election of leaders and reports about national meetings and conferences. The 1922 references also included a few controversies (e.g. divorce), but, again, focused primarily on the election of leaders and reports about national meetings and conferences. The large number of references for this particular September — November period may be somewhat skewed due to extensive coverage of the 1922 Triennial Convention of the Protestant Episcopal Church, accounting for fifty-six of the 115 references. However, even when excluding these fifty-six references to the Triennial Convention, denominational news would still account for 74% of the total denominational news references for September — November of 1922 (adjusted figures: 59 of 80 total references).

This category captures news reports involving the churches and various social and political issues and events of the time. The frequency of references related to politics and the public sphere seems dependent on the issues of the day. In 1922, the primary political issue was Prohibition. However, by the September — November period, Prohibition, which began in January 1920, had been in effect for nearly two years and was not a particularly pressing issue. The two main issues during the 1962 September — November period that caused mainline denominations to enter the public square were James Meredith’s racial integration of the University of Mississippi and the Cuban Missile Crisis. In 2002, a media-driven election season combined with the Bush administration’s pre-election push for war with Iraq may have contributed to an unusually high percentage of political type references to denominations.

Heritage includes historic references that include the selected denominational names. The references may be to church actions in the past or to historic connections between churches and buildings, communities, and institutions. These references occurred most notably in 2002, accounting for 31% of that year’s total denominational mentions. They represented 14% in 1962 and only 4% of the total in 1922. While twenty-five of the forty-two references in 2002 described the denominational heritage of individuals, communities, or institutions, the other seventeen references pertained either to sites of interest for travelers or real estate listings (e.g. descriptions of former churches; community or neighborhood landmarks). For both 1922 and 1962, this type of reference related to interactions between church bodies, frequently associated with current or historical ecumenical relations or possible unions. The considerably larger number of heritage references in 2002 seems to indicate that today’s mainline denominations are most likely to be referred to in terms of their role in the past.

This category includes references to institutions that contain in their name one of the four denominational identifiers. For 1922 and 1962, very few references are to hospitals or colleges with denominational names—only four in 1922 and two in 1962. On the other hand, in 2002, hospital and college references increased to sixty-two, or 46% of the total references. For 2002, the majority of hospital references are to the Columbia-Presbyterian Medical Center of New York (36 of 47). College references are primarily to Southern Methodist University in Dallas, Texas (14 of 15), with most of the references occurring in stories about athletics or to identify professors who are quoted in business or news stories.

This process of comparing the type and frequency of references to four denominational identifying words in the New York Times produced glimpses into the evolving role of mainline traditions in the United States.  We think we understand some of the implications of these statistics but invite others to reflect on what they see.

Whereas mainline Protestantism once enjoyed its status as an almost unofficial established national church, today the picture is much different.  Mainline denominations are no longer at the center of the national “public square” but seem to have moved to the margins of public discourse.  While these churches continue to raise their collective voices in an effort to exert influence on the body politic, this informal study seems to indicate that today’s mainline denominations are best known for their influential role in the past–as landmarks in communities and neighborhoods and as founders of institutions such as hospitals and colleges.

While influence and membership numbers are not synonymous, the figures in this article indicate that a decreased societal role has accompanied the decades-long decline in mainline church membership, though perhaps for different reasons.  The various factors that led to the changed coverage of these churches by the New York Times over the twentieth century make virtually impossible simple cause and effect determinations.

Without casting either judgment or blame, one can acknowledge that the nature of national mainstream news coverage of these mainline churches has changed dramatically over the years.  Such change may have been inevitable and may open as many doors for faithful witness in the new century as it closes, but the reality of the change needs to be noted and understood.

David Schoeni, a graduate of Candler School of Theology and a writer and editor in Kansas City. contributed to this article.