You are at:Home»Leading Ideas»Adding New Income Lines to Your Church Budget

As you plan your budget, does your church focus primarily on expenses without considering the revenue side of the equation? Stewardship expert Grace Pomroy outlines seven creative possibilities for expanding revenue beyond tithes and offerings.

In both of the stewardship classes I teach at Luther Seminary, I invite students to look at their congregation’s line-item budget. Each semester I receive questions from a few students who find their congregation’s budget includes a comprehensive outline of congregational expenses, but there’s nothing listed about income. They often wonder if a page is missing.

Congregational generosity will still have an important place at the table: instead of being a “one-dish dinner” it’s now a favorite dish on the funding buffet.

In so many congregations the income section of the spreadsheet is quite boring because it includes just one item: money received through the offering. It’s so boring in fact that they don’t even account for this income on their line-item budget.

This isn’t to say the offering will no longer be important. The offering is a vital part of worship and, for so many congregation members, giving during the service is an important part of their worship experience. But more and more congregations are seeing that relying on just the money received in weekly donations from members is no longer enough to live into the mission God has called them into. Changes must be made on both the income and expense side to realign our use of assets with the mission God has called us to join.

What other income sources might we see on a congregation’s budget spreadsheet?

This source of income has premiered as a line item on many congregations’ budgets, particularly over the last ten years. According to Lake Institute on Faith & Giving’s National Study of Congregations’ Economic Practices, 62% of congregations receive revenue from renting their space, however it only comprises about 7% of the congregations’ income. Much of this revenue comes from renting out space for one-time events like fundraisers, weddings, or conferences. What would it look like for congregations to have longer-term tenant relationships to use the spaces that stay vacant for most of the week?

Similarly, many congregations charge renters a fee that is way below market rate, and likely aren’t aware of the going market rate for space rental in their area. It makes sense for congregations to provide space at prices below market rent to tenants who align with their mission and aren’t able to pay market rent prices. But what would it look like for congregations to get to know the market rental rate for their area and create a tiered pricing structure that would allow opportunities for nonprofits who are missionally aligned but have a limited budget as well as for-profit social enterprises who might have a larger budget available? Outside of the income, think about the partnership opportunities that might be created through these relationships to create even more impact in the community!

Often congregations don’t consider major gifts unless they are raising funds for a capital campaign or building project, but what might it look like to make solicitation of major gifts a more regular practice? These major gifts of cash, stock, or property could be raised to fund special ministries, serve as start-up capital for specific congregational projects, or fund part of the congregation’s annual budget.

Some congregations struggling to meet their expenses through offering income may also have fairly large endowments. They are investment rich, but cash poor. Often these congregations are reluctant to spend any more than the minimum required of these reserved funds out of fear of losing this asset. What if endowment money was more widely used to fund ministry projects in the congregation and live out the congregation’s mission in the neighborhood? What if, like major gifts, each endowment gift included a portion going to the congregation’s annual budget?

These ideas may require a change in the rules of the endowment to allow new gifts to follow this pattern. If possible, talk to the previous donors’ (or their next of kin) to see if they would be open to following this new funding pattern.

Between the rise of digital ministry, the increasing cost of building maintenance, and the realization that a congregation’s building may no longer align with its mission, many congregations are selling part or all of their property. While it may be tempting to use this income to fund the congregation’s budget for as long as the money lasts, I’d encourage you to be more thoughtful about how this money is used. Which projects can it fund? How might it be invested so it can be used for years to come?

If your congregation starts a ministry that might reach a wider audience in the broader community (i.e., creating a pay-as-can cafe that fights hunger in your community or supporting a refugee family in your community), you might consider crowdfunding all or a piece of the project. This crowdfunding campaign can not only bring in income for that specific ministry but may also introduce the congregation to people in their community who care about a specific cause who may never be present on a Sunday morning.

Often congregations assume that, because they are a church, they are not eligible for grant funding — and that just isn’t the case. There are many granting agencies, small and large, that are open to funding projects from faith-based organizations. What if congregations sought grant funding to get a specific ministry project off the ground so there was less burden on the annual budget? What if a current ministry of the congregation (i.e., an adult day care, domestic violence shelter, after-school program, etc.) was formed into a separate nonprofit so it could be eligible for federal and other types of secular funding?

Many congregations are starting social enterprise businesses that allow them to live more deeply into their mission while also generating income for the congregation. This might take the form of a coffee shop, brewery, affordable or mixed-use housing, art gallery, coworking space, or something else entirely. Unlike most church ministries, these businesses are set up to be both sustainable and income generating while also living deeply into the congregation’s mission.

As these new income sources come in, it’s imperative that congregations are clear about how much income is being generated and how this additional income will be used. Congregational generosity will still have an important place at the table. But instead of being a “one-dish dinner” it’s now a favorite dish on the funding buffet. For congregational generosity to continue, congregation members need to know how their giving will be used and if it still makes a difference when income is coming in from other sources. This story needs to be told often and in many different ways or congregation members may assume the income from outside sources is more than enough to fund the church’s mission and ministry. 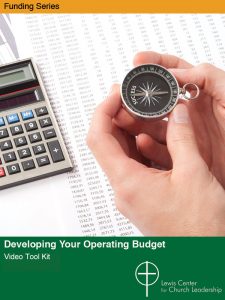 Grace Pomroy is director of the Stewardship Leaders Program at Luther Seminary in St. Paul, Minnesota.