You are at:Home»Leading Ideas»The 75 Percent Rule to Reach Younger People

Lee Kricher, pastor of Amplify Church in Pittsburgh, says it’s unlikely that younger adults will be drawn to a service where the people in visible leadership are significantly older than they are. So his church has instituted a rule requiring that 75 percent of worship leaders in visible roles be 35 years old or younger, since that’s the average age of the community they seek to serve.

That is why we instituted the 75 percent rule. The 75 percent rule is that 75 percent of all of the people in visible leadership during any given weekend service must be the average age of or younger than the community we serve. For Amplify Church, that means that 75 percent of those in visible leadership during any given weekend service need to be 35 years old or younger. That requires us to identify a lot of young people who can speak effectively, lead worship, play instruments, and do the announcements!

A woman in her early twenties who visited our church told me, “I’ll definitely be coming back because so many of the people up front look like me.”

Think about your church services over the past few months. If a high percentage of the people who were up front — those who spoke, did readings, shared announcements, led singing, and played instruments — were older than the average age of the community you serve, chances are your services are less appealing to young people than you may realize.

I remember a comment made by a woman in her early twenties who visited our church. She came reluctantly in response to an invitation from a friend. After her first service, she told me, “I’ll definitely be coming back.” I asked her why, and she said, “Because so many of the people up front look like me.” Even if you use 50 percent as your goal instead of 75 percent (as we did when we started our turnaround), you will at least be committed to having young people involved every weekend in visible leadership.

I am not saying that people over 35 years old do not have significant leadership roles in our church. In fact, the roles filled by our members in their forties, fifties, sixties, and older provide the strong and stable foundation without which we could not be a strong and stable church. In addition to the natural mentoring they do with our young leaders, they fill many of our most critical leadership roles. They also make up a very high percentage of our small group leaders, perhaps the most critical role in the church.

One of our church members who makes a significant “behind the scenes” contribution is a woman in her sixties who has served as a volunteer continuously for more than 30 years. For many years, she created the overhead transparencies that were used for our worship services. Later she adapted to creating PowerPoint slides on a PC. Now she prepares the entire service using ProPresenter on a Mac. With constant changes in technology, she was pushed further and further and further out of her comfort zone, but to her credit, she adapted. She serves from a booth in our balcony and knows that she is making a tremendous contribution even though she is not in a visible up-front role. 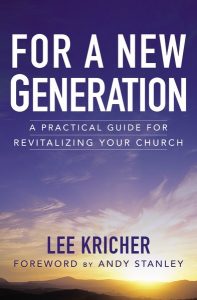 The 75 percent rule does require that talented people in their forties and fifties and older be willing to step aside from being up front every week during weekend services — even when people in the church are telling them how much they are missed when they don’t play or sing or speak. I admire them greatly because they have embraced our vision for mentoring younger leaders and have stepped up to the challenge. They know that by letting go of their “right” to be up front every week, they are opening the door for the next generation.

Taken from For a New Generation by Lee Kricher. Copyright © 2016 by Lee D. Kricher. Used by permission of Zondervan (zondervan.com).