You are at:Home»Leading Ideas»6 Reasons Your Church Needs a Planned Giving Program

David Heetland says churches would more commonly receive sizable bequests if they put in place well-defined planned giving programs. He outlines six ways that planned giving can benefit a congregation and its members.

Giving through one’s will is the most common type of deferred gift. Yet, more than half of American adults don’t have a will. Of those who do have wills, around 95 percent are not including charitable bequests. Why is this such a neglected area in church giving programs?

Church leaders are terribly shortsighted not to have a planned giving program in place and to promote it regularly. The benefits of such a program are many.

Many churches find they have to focus so much time and attention on meeting the annual budget and conducting occasional capital campaigns that little enthusiasm is shown for considering a planned giving program. Also, many churches do not engage in long-range planning but focus instead on the immediate future. Planned giving is not seen as a viable solution to short-term needs. Because planned gift income seems like such a distant possibility, it rarely receives priority attention.

Some church leaders regard planned giving as an option only for the wealthy. These leaders think that a planned giving program would have little appeal in their congregation; therefore, they see no need to promote it. Some church leaders simply feel embarrassed or uncomfortable in suggesting that the church should encourage planned gifts. “We are always asking for money from people when they are alive; must we also ask for a gift when they die?” is a question that has been raised more than once.

1. Planned giving provides a tremendous opportunity for Christians to make a powerful witness to their faith and their values.

Those who have been faithful in their giving throughout their lifetime can continue to make a witness at the time of death. Yet the contributions of most Christians stop at death simply because they have not been encouraged to regard planned giving as another opportunity to make a witness. I once asked an elderly woman who had been a tither all her life if she had ever considered tithing her estate. “No,” she responded. Then, with a look of disappointment, she asked, “How come no pastor ever suggested that to me?” One wonders how many other Christians may feel similarly cheated.

2. Planned giving also helps maintain the work of the church and its related institutions.

A gift from an individual’s estate to a church’s endowment is a gift that will keep on giving in perpetuity, helping to assure the continued strength and vitality of its ministries. What could bring greater satisfaction than knowing our resources are continuing to positively influence and benefit others even when we are no longer here?

Most annual gifts come from current income. Planned gifts, however, can come from one’s accumulated assets when they are no longer needed. Through planned giving, persons often can make larger gifts than they ever dreamed possible to those institutions that are important to them.

4. Planned giving allows persons to establish permanent living memorials for themselves or others.

Few remembrances are as lasting or meaningful as a living memorial that continues to minister to others in Christ’s name for generations to come. Scholarship funds, lecture funds, and funds for missionary support are just a few types of living memorials that have been created through planned gifts.

In addition to charitable deductions, many planned-gift arrangements provide the opportunity to reduce estate taxes and receive lifetime income. Some arrangements enable persons to increase their own spendable income at the same time that they make a planned gift.

When persons make planned-gift commitments to an institution, their interest and involvement in that institution often increase, as does their annual support. Likewise, capital giving programs are often significantly enhanced through planned-gift arrangements. Individuals wishing to make a major commitment to a capital giving program frequently discover they can best do so through a combination of outright gifts and planned gifts. 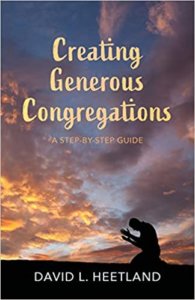 This material is excerpted from Creating Generous Congregations by David Heetland. Used by permission of Wipf and Stock Publishers, www.wipfandstock.com.  The book is available at Cokesbury and Amazon.

David L. Heetland is Senior Vice President for Planned Giving at Garrett-Evangelical Theological Seminary in Evanston, Illinois. He is the author of Happy Surprises: Help Others Discover the Joy of Giving (2019) and Creating Generous Congregations (Wipf and Stock, 2020.)