You are at:Home»Leading Ideas»5 Principles of Dramatic Improvisation Inform a Healthier Response to Conflict

David Woolverton explains how the key principles of dramatic improvisation can provide a helpful framework for responding to conflict and change in congregations. Engaging the creative edge of improvisation can produce an environment of substantive hope amid the chaos of a church conflict.

To lead amid conflict in today’s congregations, we need to accommodate an increasingly complex and unpredictable church culture. What we need is a new framework where formative growth is dependent on the leader’s ability to respond rather than react, to lead rather than manage, to improvise rather than prescribe solutions.

Stepping into the chaos of a church conflict situation with a mindset of engaging in the creative edge of improvisation can produce an environment of substantive hope.

My own journey with improvisation began with preparing for a school musical in high school. Our teacher’s hope was that we would be able to respond fluidly to whatever happened on stage, no matter what happened. I still remember his very first lesson. “The first rule of improv is ‘Yes, and …’ rather that ‘No, but …’” The premise was simple: it’s easier to ride the wave of energy coming at you and then reframe it in the direction you want to go than it is to stop it and restart something new.

Stepping into the chaos of a church conflict situation with a mindset of engaging in the creative edge of improvisation can produce an environment of substantive hope for both participants and congregations. Improv asks us to suspend our old ways of thinking that see chaos as bad and order as good. In fact, chaos is often the birthplace of creativity. It is within the chaos of conflict that a genuine leader can influence the systems at work — often by way of nonreactive, creative presence, even employing a bit of humor — and thereby shift the outcomes toward a transformative end. In improvisational leadership, control is an illusion, leadership is influence, and boundaries are freeing.

Dramatic improvisation abides by specific principles that govern how it can be done effectively. And these principles can apply within the context of missional leadership, as well.

Communication is the key to any effective improvisation, especially in conflict situations. In conflict, we tend to move toward polarization and away from dialogue. Improv teaches us that everything — spoken, shown in body language, acted out in behavior — is part of the information loop that keeps the narrative of the conflict flowing and participants interacting. By listening deeply and nondefensively and paying attention to everything within the context of the conflict, we help people feel their metastory has been heard. The act of genuinely listening to another is one of the most profoundly intimate expressions of Christ-centered love that we can offer.

A “Yes, and …” does not imply a resolution to the conflict. Rather it is the process of seeking and finding something — anything — within the perspectives of the conflicting parties that has the potential to advance the relationship, project, mission, values, or the like and on which we might further engage the relational dialogues. By discovering this “Yes, and …” the missional leader validates — indeed, honors — the participants and their respective frameworks, acknowledging their present perspectives and establishing an expectation of hope within an environment of conferring together respectfully.

Within improvisational leadership in a conflict situation, it is critically important to actually say “Yes, and …” rather than “No, but …” and to say it out loud and frequently throughout the process. Doing so increases the likelihood of generating a positive momentum and establishes an environment of creativity and innovation (and, occasionally, humor). It also affirms the partnership of the different participants, cultivating a trust that they will be seen as valued contributors to potential solutions that will emerge. Generally, people are more likely to abide by resolutions that they themselves participate in crafting.

Conflict tends to cause people to move away from each other. Improv seeks to draw them back toward each other — to partner with each other in creatively innovating new ways to view the “problem” and the relationship. The focus here is on being in a “team sport” where we ultimately work together to bring out the best in one another as well as to bring about a brand-new way to look at solutions to the disagreement. Once participants discover this common ground, they are encouraged to reframe their original conflict toward that which unites them — the team goal, the church’s mission, the organization’s values, and so on. Within the context of the congregation, the goal is to reengage the relational strengths in order to move toward one another as a reflection of discipleship and then move toward the church’s overall mission and witness. “Yes, and …” is less concerned with the presenting problem and more concerned with the overall witness for Christ that keeps us talking and walking together even in the midst of our dialectical tensions.

Finally, since improvisational leadership involves innovation and collaboration within the arenas of tension, conflict, and chaos and because tension, conflict, and chaos evoke anxiety even within a positively crafted environment, creative interactions and solutions can be engaged as experimental. I often use the following statement as I wind down a collaborative process: “Let’s commit to trying this for six months and see what happens.” Doing so gives all participants an opportunity to move forward while still negotiating the newly emerging relational boundaries. Missional leadership can advance incrementally in the context of discipleship rather than being seen as simply resolving a problem. It also avoids the inevitable stalling caused by the myth that we need to resolve conflict before moving forward in mission. 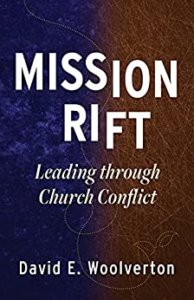 This material is excerpted from Mission Rift: Leading Through Church Conflict (Fortress Press, 2021) by David E. Woolverton. Used by permission of Fortress Press, www. fortresspress.com. The book is also available at Cokesbury and Amazon.