You are at:Home»Leading Ideas»The Risk of Trying to Please Everyone

Mike Bonem says a process of meaningful change can be slowed, interrupted, or completely stopped if a leader insists on trying to please everyone. What is critical is building enough genuine support so that the effort can move forward.

The hard work of change doesn’t call for pleasing everyone, but it does require the commitment of enough of the right people.

What’s funny about this statement is that pastors and ministry leaders readily agree that keeping everyone happy all the time is impossible. And yet time after time, the process of meaningful change is slowed, interrupted, or completely stopped by a leader’s desire to please everyone.

Even though pleasing everyone is an unrealistic expectation, some level of support and approval is essential for any new initiative. So, what does it mean to “please people” in the context of leading change? It is more than getting a thumbs-up based on personal approval. It is not catering to a consumer mindset and giving them whatever they want, even though people’s desires do need to be considered. What is critical is building enough genuine support that a major change effort can move forward. The hard work of change doesn’t call for pleasing everyone, but it does require the commitment of enough of the right people.

The diffusion of innovation

In his theory on the “diffusion of innovations,” Everett Rogers divides people into five groups: innovators, early adopters, early majority, late majority, and laggards. Every leader has experienced these different categories in their church or ministry. Even a bad idea will have some supporters. Even a good idea will have people who want more information or evidence before they get on board. And even the greatest idea, one that seems like a slam dunk, will run into some opposition. There will always be laggards in any significant change effort. Should a church leader try to win over these laggards?

Shouldn’t we give people more time to get on board?

The word laggard doesn’t suggest someone who is actively working against a proposed change. It just implies a person who is slow to come around to a new idea. This leads to the natural question, “Shouldn’t we give the laggards time to get on board?” Probably not. But understanding this requires a closer look at the people who are not easily pleased and the risks of trying to please everyone.

Some people who are slow are not laggards. The “late majority” often need a little more time for prayer and reflection or a little more information before they are ready to embrace major change. It’s worth allowing extra time in the change process for people like this. Others, however, will ask for more and more and more time. These are the laggards who may be looking for certainty that the new plans will succeed even though future results are impossible to predict. Or they may want to find a solution that won’t offend anyone in the congregation even though someone will always push back when change is proposed.

A different kind of laggard actively works against a proposed change. They’re not looking for more time to consider the idea; they are convinced that is it wrong. They may not want to make any changes, or they have a different solution in mind. Exploring different ideas is an important and healthy part of leading change, but a single objector should not be allowed to hijack the entire process.

The risk of trying to please everyone

And that is the risk of trying to please everyone. Whether the small minority that comprises the rest of “everyone” are people who need far too much time to get to yes or ones who are actively resisting (or some of both), waiting to achieve 100% support for a change often undermines the very change you are hoping to accomplish.

Consider what may be lost if there is a lengthy delay while trying to please everyone. Some of the earliest and most enthusiastic supporters (innovators and early adopters, in Rogers’s terminology) may be frustrated and leave. This is particularly ironic since the purpose of delaying is to get everyone on board. It is better to lose a few laggards who are holding out than to frustrate the innovators who can spearhead current and future changes.

Even if those early supporters stay, their enthusiasm may diminish because of the lapse in time or because an innovative proposal has been diluted in an attempt to please everyone. In addition to losing the edge with these supporters, the lost time is a precious resource that cannot be regained. And then there is the energy a leader spends trying to convince holdouts, energy that is then unavailable for other important needs.

Leaders need to have strong support for any significant organization change. But if you tend to think, “what will it hurt to wait a little longer to get everyone on board?” then take a moment to count the real cost. The art of leading change is knowing when to wait a little longer and when you’ve waited long enough. The wise leader doesn’t wait for everyone to get on board but does make sure that enough of the right people are supportive before pressing ahead. 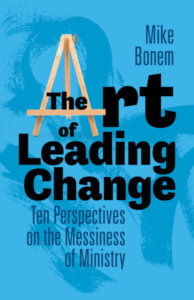 From The Art of Leading Change: Ten Perspectives on the Messiness of Ministry by Mike Bonem. Copyright © 2022 Fortress Press. Reproduced by permission. The book is available at Fortress Press, Cokesbury, and Amazon.

Mike Bonem is a facilitator and consultant with Texas Methodist Foundation (TMF). Previously, he was Executive Pastor of West University Baptist Church in Houston. He recently wrote The Art of Leading Change: Ten Perspectives on the Messiness of Ministry (Fortress Press, 2020), available from the publisher and at Cokesbury and Amazon. He is also the author of Thriving in the Second Chair: Ten Practices for Robust Ministry (When You're Not in Charge) (Abingdon Press, 2016), available at Cokesbury and Amazon. He blogs at mikebonem.com.