You are at:Home»Leading Ideas»Saying “Yes” to Clear Purpose Can Require Saying “No” to Long-Cherished Ministries

Jaye Johnson says a congregation that is clear about who it is must say “no” to ministries that are inconsistent with that purpose. While this can be painful, it is essential to releasing new energy for mission.

One might think that getting clear about the purpose of a congregation could be difficult, but I doubt you think it would be painful. And yet, a peculiar phenomenon occurs when purpose is clarified and a church says, “This is who we are.” It is impossible to announce this without at the same time saying, “This is who we are not.”

Saying “no” is exceedingly difficult when your prayerfully discerned purpose does not support a beloved ministry. But it is a critical aspect of missional accountability.

A congregation clear about who it is not must say “no” to ideas for ministry that are inconsistent with that purpose. Saying “no” is exceedingly difficult when your prayerfully discerned purpose does not support a beloved ministry, but it is a critical aspect of missional accountability.

A beloved ministry may no longer serve the vision.

I spent months working with a church leadership team to determine who God was inviting them to be. After the purpose was clarified and the leaders were able to reimagine a new future, enthusiasm peaked. The leadership made different decisions and tried new things that were consistent with the vision they were discerning; some failed, but most were a fantastic success.

One member of the leadership team, Debbie, was a lifelong member of the church and a longtime organizer of the church’s much-loved annual fall bazaar and bake sale. This event had been part of this church’s history for more than 50 years, and Debbie had been the champion of that ministry for 25 years. Debbie arrived at one meeting visibly troubled. In the spiritual formation portion of the meeting, someone asked if she was okay. “No. I am not okay. I am distraught,” Debbie said. “I believe with all my heart that God is calling us to live into this vision as a church.” Another team member said, “I am sorry you are troubled, but why does that upset you?” Debbie replied, “Because I do not see how the bazaar fits that vision and, in good conscience, I cannot continue to organize it, nor do I think we should do it anymore because it is not consistent with who God is calling us to be in this time and place.”

The room was dead silent. Again, one of those sudden stops. The leadership team decided that night to end the beloved fall bazaar because it no longer fit the church’s vision. The team decided to cease a treasured ministry with half a century of history, knowing full well that it would cause great angst within the congregation. Still, they felt it was a necessary in keeping with the new vision.

In steering the congregation toward its destination, they made a course correction. In place of the bazaar, the church adopted a neighborhood elementary school. Members read to kids, bought supplies, supported teachers, and volunteered for the school mentoring program, letting the prayer team know when they would be mentoring a student so that the team could pray at that time for that mentor and mentee. Just to be clear, for confidentiality reasons, the kids’ names were not shared with the church.

The church set up a discretionary fund and gave access to the principal, saying, “You know what our kids need; use these funds to meet those needs, and let us know when you need more.” The principal regularly updated the leadership, sharing stories of how the church’s ministry was impacting lives. Eventually, he was so impressed by the church’s work and witness that he joined, as did many teachers and families from that school.

Had the bazaar continued as it always had or if Debbie had refused to offer its ending for consideration, the church would have lacked the energy to enter into that bold partnership with the school.

Two years later, the church brought back the bazaar, working in partnership with the school. This time, rather than using it as a fundraiser for the church, all the money they made was donated to the school, and the faculty, staff, and parents helped staff the event.

Debbie experienced discomfort caused by the clarifying of the church’s purpose and vision. She realized that the church’s proposed destination could not include something she cared about, but, to her credit, she followed God’s purpose and not her preference. This clarity of vision allowed Debbie to tolerate the pain of letting go of the bazaar. As Janet Cawley observed in her book, Who is Our Church? Imagining Congregational Identity, “The truth will make you free, but first it will make you miserable. Sometimes the truth is painful…but if there was some promise that pain was going to lead somewhere — to freedom or healing or reconciliation — you could face it. But without that promise?” In other words, without the promise of what the future could hold and a picture of what could be possible, it would have been inconceivable for Debbie and the rest of the congregation to even contemplate letting go of a ministry as cherished as the bazaar. Purpose and vision show us the path to the destination. 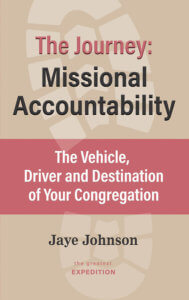 This material is excerpted from The Journey: Missional Accountability — The Vehicle, Driver and Destination of Your Congregation (Market Square Books, 2021) by Jaye Johnson. The book is also available at Cokesbury and Amazon.

Jaye Johnson is director of congregational excellence for the Iowa Conference of the United Methodist Church.