You are at:Home»Leading Ideas»Review of Imagining the Small Church: Celebrating a Simpler Path

A previous generation of students such as Carl Dudley, David Ray, and Anthony Pappas have catalogued the unique culture of the small church, here defined as less than 100 in worship. Steve Willis amplifies and illustrates items from that list from his experiences as pastor of and consultant to healthy small churches in rural southern Appalachia and eastern Washington State. Willis appreciates the organic simplicity of the small church’s structure and the nimbleness with which it responds to its environment in spite of its limits. He celebrates the way small churches honor the seasons of the year and the stages of the human lifespan.

Small churches are assailed by overbearing central culture values that measure success in terms of size, constant growth, and ability to meet consumer needs and by denominational leaders prone to compromise with those values.

But the energy of this book is not its sympathetic portrait of healthy small churches — as appealing as that is with its cast of authentic characters. Its energy is in its argument that small churches are under double assault. They are assailed by “overbearing central culture values” that measure success in terms of size, constant growth, and ability to meet consumer needs and by denominational leaders prone to compromise with those values. Under the pressure of mainline decline, denominational executives try to impose the standards of seemingly successful megachurches on seemingly unsuccessful small churches. And it is a recipe for frustration on all sides.

As someone who once worked as a denominational manager, I know that “the pressure of mainline decline” is less a siren call to accommodate to central culture values than the desperate attempt to save full-time clergy positions. And that’s what makes chapter 6, “Bills,” the most important chapter of the book. Willis candidly recounts his journey from an M.Div.-educated, ordained clergy on an upward career path to his decision to re-direct ministry toward the small church. Some values are let go, others taken up; new vitality is released. Willis suggests ways his denomination could begin a similar journey of reformation, suggestions that translate across denominational lines, such as greater validation of bi-vocational ministry. 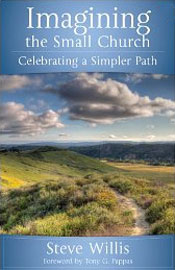 It is a challenge to both pastors and denominations to exercise prophetic imagination. “Do not be afraid. God is
here in the periphery too … The periphery is a surprisingly good and blessed place to rediscover the joy and the treasure that is worth everything.”

Imagining the Small Church: Celebrating a Simpler Path by Steve Willis (Alban, 2012) may be purchased from the publisher. It is also available from Amazon.

Lewis Parks is Professor of Theology, Ministry and Congregational Development at Wesley Theological Seminary. He pastors Calvary UMC in Lemoyne, PA, assists denominational leaders around vitality in small churches and is author of several books, including Small on Purpose: Life in a Significant Church (Abingdon Press, 2017) [Cokesbury | Amazon].