You are at:Home»Leading Ideas»How Parents Help Children Grow in Faith

New research on how parents pass faith to their children provides strong evidence that talking with children about faith in the context of daily life is powerfully important. Ann Michel of the Lewis Center staff reports on this and other findings in Handing Down the Faith by Christian Smith and Amy Adamczyk.

Parents are the most powerful influence in determining if their children will continue in their faith tradition when grown. Not clergy. Not Sunday school teachers or camp counselors. Not peers or the media, youth programs, or service trips. Much research has documented this leading role of parents. Less studied are the critical questions of how and why parents seek to pass down their faith.

It’s not enough for a parent to passively model faith by ‘walking the walk.’ They must also regularly talk with their children about their walk, what it means, why it matters, and why they care.

Christian Smith and Amy Adamczyk attempt to answer these questions in Handing Down the Faith: How Parents Pass Their Religion on to the Next Generation (Oxford University Press, 2021). Their findings are drawn from in-depth interviews with several hundred parents across a range of faith traditions and the results of several recent quantitative studies. All of the parents interviewed were classified as “religious” by virtue of having some membership connection with a church, synagogue, temple, or mosque.

The attitudes and actions of parents were remarkably similar across the varied faith traditions studied. Smith and Adamczyk attribute this to a dominant cultural model of parenthood that sees a parent’s role as preparing and equipping their children to lead happy, successful lives. Religion serves the purposes of helping their children lead good and moral lives and providing support and security. Parents are largely motivated by these practical concerns rather than theological or doctrinal imperatives. Indeed, most parents studied were uncomfortable with absolute faith claims and see truth in various forms of religious expression. For many, the hope that their children will adhere to their faith tradition is grounded in a desire to strengthen the parent-child bond and promote long-term family cohesion, although, for most, religion is secondary to other sources of family unity.

How do parents transmit faith to their children?

Several factors seem to contribute to the likelihood that a child will embrace their parents’ faith. One is parenting style. Parents who combine high expectations for their children with a high degree of involvement, communication, and warmth are more effective in transmitting their religion than are parents who are more permissive, disengaged, or authoritarian. Another relevant factor is the strength of the parents’ personal religious commitment. But Smith and Adamczyk identify an even more important factor. They say the single most important practical takeaway from their research is that it’s not enough for a parent to passively model faith by “walking the walk.” They must also regularly talk with their children about their walk, what it means, why it matters, and why they care.

Even more important than what the parents have to say is how they say it. The key is talking regularly about religion in the course of ordinary daily life in a way that is neither hands-off or overbearing but rather open, inquiring, and child centered. Talking frequently about religion not only signals to children that it is important to their parents, it also provides immersive training in the language of faith. Smith and Adamczyk say that religious language is not mainstream America’s first language. And learning a second language always requires practice. If children only hear religion talked about an hour or two a week, they never become fluent enough to feel comfortable as adults in religious communities that speak what is essentially a foreign language.

Smith and Adamczyk posit that the dominant role of parents in transmitting faith is related to deeper cultural shifts in how Americans view the purpose of religion and the nature of family life itself. Religion was once seen as central to the life and solidarity of the larger community, but over the course of the 20th century the cultural understanding of religion has evolved. Religion is largely regarded as a matter of individual expression and choice, albeit an important one. One’s faith journey is more likely to be seen as a matter of personal growth and self-reflection than one of plugging into a religious institution. And with this shift, home and family have replaced institutions in shaping what is seen to be a matter of personal identify.

A parallel, related shift has taken place in the realm of marriage and family life. Good parenting is no longer understood as helping children conform to received societal norms, but rather equipping them with the cognitive and emotional skills to figure out who they want to be. Trends toward smaller families, more intensive, hands-on parenting, and closer emotional bonds between parents and children all reinforce the private domain of the home as the fulcrum of faith formation.

A supporting role for congregations

The parents interviewed acknowledged and embraced their primary role in nurturing their children’s faith, setting to rest the common myth that parents are happy to outsource this task to religious professionals. But parents do look to their congregations to reinforce and support their primary role by offering formal religious education, moral instruction, friendships, and connection to a larger community.

Taken as a whole, this research is yet another reminder of the decline of the institutional church, particularly since the religious families represented in this research are atypical. Nationally representative surveys suggest that only about one in three American parents sees their children growing in faith as a major priority. And even among the religious families studied, their reasons for wanting to pass their faith to their children were largely individualistic and instrumental.

Yet, it is encouraging to learn that many parents actively embrace their role in conveying faith. And Smith and Adamczyk’s research contributes significantly to our understanding of how this occurs most fruitfully. It can and should promote candid conversations among clergy and parents about how children grow in faith and how congregations can best equip parents for their role in fostering faith development. 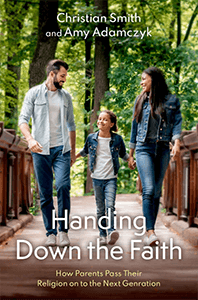 Ann A. Michel has served on the staff of the Lewis Center for Church Leadership since early 2005. Currently, she works as one of the co-editors of Leading Ideas e-newsletter. She also teaches at Wesley Theological Seminary in the areas of stewardship and leadership. She is the co-author with Lovett H. Weems Jr. of Generosity, Stewardship, and Abundance: A Transformational Guide to Church Finance (Rowman & Littlefield, 2021) available at Cokesbury and Amazon. She is also the author of Synergy: A Leadership Guide for Church Staff and Volunteers (Abingdon, 2017), available at Cokesbury and Amazon.

Why Wesley? We asked alumni and a current student why they chose Wesley for their Doctor of Ministry. They answered with these videos.

Wesley Theological Seminary and the Lewis Center together offer the Doctor of Ministry in Church Leadership Excellence. With this track, clergy will receive the enhanced knowledge, skills, and motivation to increase congregational and denominational service, vitality, and growth.