Sue Nilson Kibbey, who works with missional church initiatives in Ohio, shares the story of a church that engaged the mission field immediately around its building by forming a “Good Neighbor” team. The team’s sole purpose was to get acquainted with every person or family within sight of their church building.

A congregation nestled comfortably in the midst of a two-mile radius of middle-class homes strongly desired to reach new people for Christ. They had deep hearts of compassion and felt God speaking to them to become invitational. To accomplish that goal, they had been investigating the possibility of planting a new worshipping community on the city’s outskirts, 13 miles away in an area filled with young professionals. A preliminary estimate of the cost to support this plant for the first three years added up to a few hundred thousand dollars.

I asked a simple question and the answer surprised us all. “Have you researched how many of your current members happen to live within six blocks in any direction of the church here?” The pastor responded immediately, “Yes, we have done the work of plotting where our congregation lives. Only one family attending here lives within six blocks. Interestingly, though, no one else does. Everyone else drives in from other neighborhoods.”

The pastor and leadership realized it wasn’t necessary to drive miles to the outskirts of the city and invest significant funds to reach the churchless. They had a mission field immediately around their existing church building that was completely untapped.

Do you know your immediate neighbors?

“Do you happen to be acquainted with who lives in the houses on either side of the church, or the three houses right across the street? Your neighbors, so to speak?” The room was silent. “How about the four houses along your parking lot in back? Have you met any of them? What are the names of their children, their pets? Do they have any needs the church could care for, or any way the church could be good neighbors to them and build friendships with them? Do they even go to church anywhere?” More silence.

After further contemplation, the pastor and leadership realized it wasn’t necessary to drive miles to the outskirts of the city and invest significant funds to reach the churchless. They had a mission field immediately around their existing church building that was completely untapped. Perhaps launching a satellite campus in the upscale suburbs seemed trendier and more glamorous, but simply walking across the street or parking lot to meet and get acquainted with the church’s neighbors was intimidating yet free — with eternal reward potential.

A “Good Neighbors” team was formed, composed mostly of the church’s newest members. The team’s single purpose was to get acquainted with every person or family whose home was within sight of the church building, a two-block square. The Good Neighbors team would gather to prayer walk the “Neighbors Square” as they nicknamed it, introducing themselves to the residents who happened to be outside. They identified themselves as being from the church and simply asked, “How can our church be a good neighbor to you?” They also asked, “Do you have anything we could pray about for you?”

Their goal was to make friends. Sometimes they took plates of homemade cookies to share. They learned the names of children, of cats and dogs. They heard about griefs, challenges, and joys. They occasionally helped change a flat tire. One on the Good Neighbor team went to a court hearing in spiritual support of a church neighbor. Others on the Good Neighbor team decided to start a quarterly neighborhood birthday party in the church fellowship hall, and invited the church’s immediate neighbors and their families for one afternoon of celebrating every neighbor’s birthday at the same time. Many others in the congregation attended and brought cards; some even brought small gifts. A few neighbors from houses down the street — not on the Good Neighbors team’s route – heard about the party and unexpectedly showed up as well. They were immediately added.

Eventually several of the church’s neighborhood residents were spotted sitting in worship with their new friends from the Good Neighbors team. Some of the children attended Vacation Bible School. And at the fall all-church vision dinner, the pastor had two members of the Good Neighbors team share stories of their experiences. The congregational response was so enthusiastic that his church eventually developed several additional Good Neighbors teams to befriend an entire six-block square area around itself. The teams each took spiritual responsibility to help the church become a loving, relational neighbor to those living in its immediate mission field. A few months ago, the pastor baptized a mother and her four children whose home he can see from the church’s office window, and they have all become deeply involved in church life. A weekly Good Neighbors Bible study has started on three of the blocks, led by individuals serving on those teams.

Who are your church’s neighbors, literally? 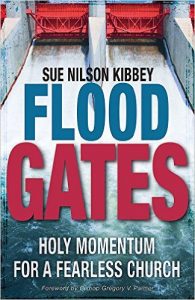 This article is adapted from Sue Nilson Kibbey’s book Flood Gates: Holy Momentum for a Fearless Church (Abingdon Press, 2016). Used by permission. The book is available at Cokesbury and Amazon.