You are at:Home»Leading Ideas»Getting Comfortable Preaching about Money and Generosity

Preaching on the topic of money is spiritually challenging. And it can also be personally challenging to leaders plagued by their own economic insecurity or discomfort in asking people to give. Meredith McNabb of the Lake Institute on Faith and Giving says preachers must address their own concerns and fears about money talk so they can invite their people into the faithful practice of generosity.

For anyone who offers interpretation of sacred texts, the topic of money may feel like one that’s particularly close to the hearts of people’s lives. This topic may even get you in trouble with those resistant to the spiritual challenge directly provided by those texts. For instance, Shabbat teachings that insist on rest and nonproductivity as a warning not to allow anyone to become economically enslaved to their own material growth could be a significant challenge to share with a congregation full of entrepreneurs. Blunt scripture quotations like “sell all you have and give it to the poor” pose a significant challenge to nearly everyone who takes them seriously!

Preaching to the topic of money is fundamentally a different thing than giving a fundraising speech.

But for congregational leaders, teaching and preaching about money may also feel personally uncomfortable given their own money concerns. Preaching a message that calls for people to give money to the congregation can seem inextricably tied to the personnel committee meeting later that week that will determine the leader’s compensation or employment. Congregational leaders participating in Lake Institute for Faith and Giving courses have frequently noted their concern about offending people who would rather not be asked for money. For some, there’s a delicate balance: they don’t want to look like they’re asking for a personal favor for themselves — but they do want to inspire givers to contribute enough to fund the organization, which does include their own salaries. For some leaders, preaching about giving also cuts too close to their own indebtedness, financial illiteracy, or meager compensation. Many clergy leaders are stuck in their own economic insecurity and therefore stuck in how they can address economics for their parishioners or generosity for their congregations.

Preaching about generosity is fundamentally different from giving a fundraising speech.

Even for leaders who have reconciled themselves to the topic of money and lead spiritually receptive congregations, preaching is fundamentally a different thing than “giving a fundraising speech.” The Rev. Dr. Teresa Fry Brown, Bandy Professor of Preaching at Emory University, describes preaching as “relating to others something about God’s presence, purpose, and power in one’s life and in the life of all of humanity.” That’s a far cry from what some people might think of as they observe the emcee’s appeals to boost contributions at a fundraising event!

For a community of faith, gathered worship and the words shared in that time contribute to their individual and institutional formation, and the invitation to give — to that congregation and beyond it — is entirely appropriate. The gifts given are not a currency-based applause-o-meter to gauge the quality of the sermon or the one giving it. For congregations that receive an offering during worship, the act of giving is indeed a liturgical “response” to God — but that’s not a personal up or down vote on the leader! Whether contributions are made in or beyond worship, preaching and teaching can and should emphasize that the focus of the invitation is on the donor’s own generosity and the impact of what the contribution does. Moral formation, sacred inspiration, and exegetical information are all being offered — and a contribution is one of many good responses from those who receive the message.

Preaching about generosity should not be limited to an annual “PBS pledge drive” timeframe! Generosity preaching is not limited to any particular season or special day nor is any season or day off-limits for it. Again, when the preaching and teaching is focused on the listeners’ faith experience of generosity and the impact of their contributions for the community, every sermon is a good opportunity to speak to the spiritual side of generosity. 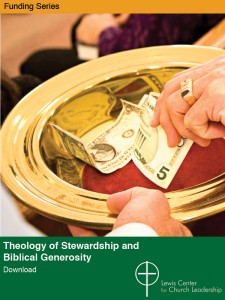 This article is adapted from “Preaching Generosity”, which appeared in the August 9, 2022 issue of Insights, the bi-weekly e-newsletter of the Lake Institute for Faith and Giving.

Meredith McNabb is the Associate Director for Educational Programming for the Lake Institute on Faith and Giving. Meredith is an ordained clergy member in the Virginia Conference of the United Methodist Church who served as the Director of that conference’s Center for Clergy Excellence from 2014 – 2019. Meredith participated in the Lewis Fellows leadership development program for outstanding young clergy.