You are at:Home»Leading Ideas»Effective Leaders Know When to Take Risks and When to Exercise Restraint

Larry Buxton says some leaders are naturally risk-inclined, others risk-adverse. In a recent book on the leadership of King David, he suggests that effective leaders have the courage to act either way depending on circumstances.

No one leads by always playing it safe. Leadership is risky business, and leaders can be found in many places along a risk continuum. We can put so-called risk-inclined leaders at one end and risk-adverse leaders at the other.

Some leaders are drawn by risk. They’re invigorated by daring actions that cut against the grain. They think that leadership, by definition, is moving ahead of the group, showing independence and challenging others to adopt to the leader’s reality as their own. The leader as an outlier, a visionary, a futurist and an innovator is intentionally destabilizing. In some ways, David’s daring dancing fits here.

Risk-inclined leaders would do well to examine what compels them to disrupt the status quo. Some leaders thrive on chaos and on keeping others off-balance; others congratulate themselves for the bravery in consistently separating themselves from their organizations. Some leaders cling to a variation of “Woe to you when all speak well of you” (Luke 6:26), finding virtue in the very act of fomenting discontent in their groups.

Sean Martin, professor at the University of Virginia Darden School of Business, writes, “[Some leaders tend to] demonstrate self-confidence and comfort with risk-taking — and sadly, these traits may lead to the initial perception that they are impressive. But studies show that they are also more likely to disparage others, take more than reasonable credit, hog opportunities for themselves, engage in impulsive behavior, and respond defensively to feedback.”

By definition, risk-taking creates uncertainty. In an environment of uncertainty, it may be difficult to know just where a leader stands on any given day. Risk-inclined leadership can be dangerous.

Leaders on the opposite end of the leadership continuum are more risk adverse. These leaders usually understand that cohesion and stability are far more important to an organization’s mission than disruption. Steady and reliable leaders free their organization from anxiety and uncertainty so that they can do their best work with confidence. Often, the culture itself contains so much “whitewater” that organizations value a steady steering hand.

Steadiness is contagious. When an organization has a clear mission and vision, the leader who adheres to those principles promotes predictability, trust, and focus. Predictability in an organization increases its effectiveness, as members can stay attentive to the mission without being distracted by anxious uncertainty. Effective leadership today consistently stresses mindfulness, collaboration, teamwork, trust, relationship-building, and other similar skills.

Successful risk-adverse leaders are masters at analyzing changes in business and culture so that they can discern what choices they are avoiding — and the few changes they will decide to make. If challenging the status quo is called for, this kind of leader tends to carefully weigh the risks. This approach raises a whole host of questions among peers and co-workers, however. Is this leader avoiding change because of some higher principle? Is this leader exaggerating the consequences of risk? Is this leader flat-out afraid? If you are a risk-averse leader, you need people around you who are collaborative, trusting, clear-sighted, and unafraid to speak openly.

Courage is seen in both behaviors

My point is that courage can be seen in both behaviors. The risk-inclined leader shows courage by holding steady, restraining impulses, trusting the process, and maintaining security. The risk-averse leader shows courage by stepping out, breaking the pattern, challenging expectations, and disrupting the status quo. Rarely is effective leadership defined solely by one approach or the other. On the contrary, effective leadership is having the courage to act either way and depend on the circumstances of a situation.

The courage of biblical leaders

Where would Jesus fall on this continuum? Without pinning a label, we clearly see him exercise both aspects of courage in his ministry. True, the nature of his ministry was intentionally provocative. His divine mission was to overturn old assumptions about the world and inaugurate the kingdom of God. His confrontational entry into Jerusalem on Palm Sunday and his overturning merchants’ tables in the temple are classic examples of a courage that challenged, provoked, and antagonized.

Jesus also exercised restraint when restraint was more strategically effective. At the wedding in Cana, Jesus’ mother urges him to do something when the wine runs out too soon. He replies, “Woman, what concern is that to you and me? My hour is not yet come.” Near the end of his life, while confronted by soldiers in a garden, he restrains a disciple from swinging his sword. In his final hours, Jesus refrains from answering Caiaphas, resists the entreaties of Pilate, endures ridicule and punishment, and allows himself to be crucified. All of that took courage.

David was tasked with inaugurating a new future for a new nation. How do you judge his dancing? He clearly risked being provocative, even scandalous, in marking this bold beginning. David chose scandal over safety as he inaugurated the united new kingdom.

Where, on such a continuum of courage, are you? What is your natural inclination? You might think of times when you’ve stuck your neck out for a good cause even though it would have been easier to stay silent or times when you’ve restrained yourself from speaking or acting impulsively and saw the benefits of that restraint. We can pray, meditate, and seek wise counsel to know for ourselves which form of courage we need. 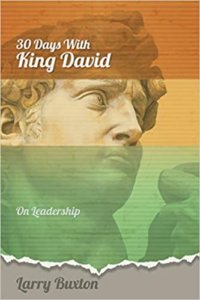 This article is excerpted excerpt from 30 Days with King David on Leadership by Larry Buxton, published by Read the Spirit books. Used by permission. The book is available at Amazon.

Larry Buxton (larrybuxton.com) is a retired pastor, author, coach, and speaker. He is an adjunct faculty member at Wesley Theological Seminary and author of Thirty Days with King David: On Leadership, published by Read the Spirit books and available at Amazon.

What does it mean for a leader to stand in the gap between the way things are and what they could be? Howard Thurman’s prophetic witness exemplified this form of leadership. Thurman did not demonize those responsible for systemic ills. Instead he emphasized a positive vision of the way things could be. This track of doctoral study from Wesley Theological Seminary focuses on the power of a prophetic witness like Thurman’s to draw people toward a positive new future. In a world that’s all about drawing attention to one’s self, a prophetic witness moves us toward a new reality grounded in God’s grace. Learn more and apply now.