John Winn finds useful advice for churches and synagogues in the book Death by Meeting: A Leadership Fable by Patrick Lencioni.

The title alone is enough to make you reach for the book. Although it is written for the secular, corporate world, the book relates quite easily to church and synagogue as well as most other groups that are meeting themselves to death. Its author, Patrick Lencioni, is president of The Table Group, a San Francisco Bay area management consulting firm. A careful reading reveals, also, that he is an active churchman. He seems to know firsthand that this kind of death is epidemic and that it has afflicted organized religion.

Meetings are a puzzling paradox: on the one hand they are critical; on the other hand they are painful, frustrating, and often ineffective.

Lencioni’s point is that meetings are a puzzling paradox: on the one hand they are critical; on the other hand they are painful, frustrating, and often ineffective. And, usually too long. The problem is not inherent to meetings themselves. It has more to do with the way we perceive them and manage them.

The first 217 of 260 pages contain a fable — a fictional story about a software company selling golf video games. The CEO, Casey McDaniel, is a former second-tier professional golfer. Most of his employees would describe him as a wonderful man, but just an ordinary CEO. Under the leadership of this well-liked but ineffective CEO, the company’s growth fell short of its potential and morale was sinking.

The story of Casey’s company sounds a lot like the life-cycle of a local church as it rises and falls depending on the popularity of the pastor or pastors at a given time. After awhile it settles into a “groove” and everyone connected with it simply does maintenance work. Little passion, lost mission, but still a church, they think.

Casey’s story is an interesting ride that involves crisis, intercession, confession, transformation, and happy ending — kind of like the New Testament. With the help of a Christ-figure (incognito, of course), Casey almost unknowingly becomes quite a different kind of leader. He finds himself becoming more clearly defined and much more deeply connected to those around him. His growth has a salutary effect on everyone else.

There are interesting, practical tidbits along the way. In one session the “new” Casey has his staff do some prioritizing of next steps in fulfilling their mission. He wants them to narrow the five ideas down to the top two, so he tells them, “Everybody has two votes. You can use them both for one idea or split them between two. But you can’t vote for your own idea.” Nice move, Casey.

Casey’s staff meetings undergo the same transformation. The addition of drama to the meetings was the key. Lencioni points out that most leaders do all they can to take the conflict OUT of meetings before they begin. Casey had been this kind of “peace at any cost” leader. The conflict, however, is the drama that makes the meetings more than going through repeatable motions again and again. Conflict stimulates interaction, which in turn, births passion, and the realization that standing for something important is important.

The resolution of the paradox of meetings, ironically, at first seems to be more meetings. It has to do with more clearly defined meetings, with the accent on concreteness and action. In the long run, this leads to less time spent in meetings and more efficient results.

Lencioni prescribes four kinds of meetings. Vividly, he likens them to the formats of television shows and the movies. They are: 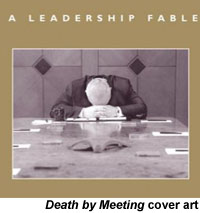 While most easily correlated to staff situations, with a little imagination, Death by Meeting, can speak to us in the church at a wide variety of levels. Lencioni avoids jargon, writes in a simple, very readable style. The story part is a “page-turner,” in fact. There are lots of nice moves in this little book. So, come on, break out of your “churchy patterns.” Read something outside your own discipline.

John Winn is mentor emeritus, The Center for Pastoral Effectiveness, Louisiana Conference, United Methodist Church. Death by Meeting: A Leadership Fable…About Solving the Most Painful Problem in Business by Patrick Lencioni (Jossey-Bass, 2004), is available from Amazon.