You are at:Home»Leading Ideas»5 Ways to Encourage People to Increase Their Giving

Stewardship expert Rev. Charles Cloughen Jr. outlines five proven strategies to help people grow in giving and strive toward the tithe. Key factors include helping your givers see an increase as reasonable and doable by asking for a specific amount and leveraging the power of relationships through a personal ask and thank you.

I believe that giving to God’s work should be based on the tithe and proportional giving. The reality is most people can’t increase their pledge to a tithe in one fell swoop, but they can attain that level of giving over time through giving an increased proportion of their financial resources each year.

One of the most effective ways to increase giving is to write a personal letter asking for each pledging household to consider increasing their pledge by a specific dollar amount.

1. Ask givers to increase by a specific dollar amount.

One of the most effective ways to increase giving is to write a personal letter asking for each pledging household to consider increasing their pledge by a specific dollar amount. The least effective is asking for a percentage increase, because the parishioner will often compare the percent raise they got on their job with the percent increase the church is asking for: “I didn’t get a 10 percent raise, asking me for a 10 percent increase in giving is crazy.” Yet asking someone to consider an increase from $65 to $75 a week makes it seem doable, although it is a 15 percent increase. Asking for consideration of an increase of a monthly pledge from $200 to $225 is a 13 percent increase, but also seems reasonable and doable.

A second way I have found effective is a giving chart based on a household’s present pledge. It is a one-page document with the first column the household’s current pledge, the second column a suggested increased amount, then the third column suggesting an amount to support future growth. It is a full page with amounts from $5 to $200 for weekly giving and $200 to $2,000 for monthly giving. Both are only suggested ranges based on your congregation’s weekly and monthly pledges. I present this as an illustration.

Another suggestion, based on a congregation’s culture, is to list all who have made pledges for the coming year on the back of the program. It is a way of witnessing to the faith of those who have said yes to financially supporting the congregation. This list also makes the congregation aware of those who have said yes and encourages others to pledge as well. If this is done, there should be a place on the pledge card to indicate you want to remain anonymous. Always double check. Never publish the name of a donor who wants to be anonymous.

I have found that the six most important words in a stewardship effort are “Thank you, thank you, thank you.” Following the receipt of the pledges, the pastor needs to write a personal letter to each pledging household thanking them for their pledge. The most effective, of course, is a handwritten thank-you note. Writing theses notes is one of the most effective uses of time for the pastor. It will have an incredibly positive impact over time. It helps build relationships, the key to increased giving over time. J. Clif Christopher states, “The rule in fundraising is that people give to people and not to programs.”

5. Build on the power of relationships.

I have experienced the powerful impact of a personal “ask” and personal thank-you note. When I took responsibility for the Bishop’s Appeal in the Episcopal Diocese of Maryland, 34 clergy had made gifts the year before. We made three changes in our approach. First, I wrote a personal note to ask every clergy in our dioceses for their giving, then followed up with another note if necessary. Second, I wrote a personal note to each of them thanking them for their gifts, and citing how they were making a difference of how their gift was helping to change the world. Third, we listed all givers to the Bishop’s Appeal in our convention booklet, both clergy and laity, so they would be publicly thanked. We went from 34 clergy givers to 207 over the period of seven years. I attribute this increase not to a better brochure but a better personal relationship, request, and thank you. 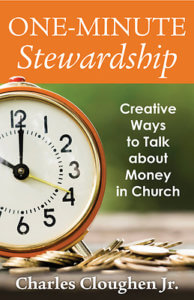 This material is excerpted from One-Minute Stewardship: Creative Ways to Talk about Money in Church (Church Publishing Incorporated: 2018) by Charles Cloughen Jr. Used by permission. The book is available at Cokesbury and Amazon. Download a flier for more information.

Charles Cloughen Jr. is an Episcopal priest who has served as pastor for churches in Rhode Island, Connecticut, Texas, and Maryland. He has led 34 stewardship campaigns during his time as pastor and has also served as Director of Stewardship, Planned Giving, and Development for the Episcopal Diocese of Maryland. His book One-Minute Stewardship: Creative Ways to Talk about Money in Church (Church Publishing Incorporated: 2018) is available at Cokesbury and Amazon.